The great Catalan capital of Barcelona was host to the eDreams Mitja Marato Half Marathon. This half marathon has had to take second place to the new marathon which was reborn in 2005. However it is a great race and looks set to become popular with local runners and foreign guests as it establishes itself and if the number of world class elite athletics who entered is anything to go by, it certainly will. 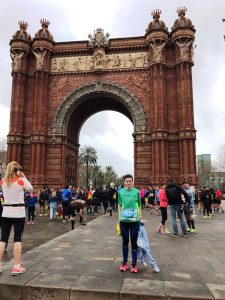 Lining up at the start somewhere amongst the 15,239 competitors wearing the Mighty Green of Sidmouth Running Club was Katie Kent who was accompanied by an old school friend from Finland Dr Valpuri Luoma.

The route is a flat, fast course that takes in many of the city’s sights. It can best be described as a figure of 8 which is great for spectators and supporters. Starting at 9am it is still cool and the first 10 miles of the course are along many of the city’s wide boulevards with their pavement cafes from where you can relax and watch the runners go by. The shade from the tall buildings is a welcome feature. The last three miles is along the coast road and then back into the city to finish. It was dry and around 10 degrees for the race and although the windy conditions clearly hampered the elite runners, Katie and Val took no notice and both finished in a respectable time of 2:06:20 giving them plenty of time to change and enjoy the many delights of this beautiful city.