Sidmouth Running club member, Clive Gilbert celebrated his 50th birthday the Mighty Green way on Saturday. Clive was looking forward to being at the younger end of the 50-54 age group at Exmouth park run, rather than being at the top end of the 45-49 age group. Despite the bright and breezy conditions, Clive was delighted to finish in 50th place with a PB. Clive was pleased to see other SRC members at the start including Jack Wilson who had a terrific first Exmouth parkrun, coming in 6th overall in 19:14 minutes! 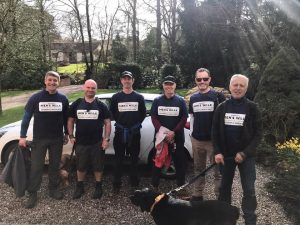 A quick turnaround and Clive then took part in the Hospiscare Men’s Walk with fellow Mighty Greens Derek Blackburn, Chris Heywood, Mark Andow and Mark Norton. They all enjoyed each other’s company at a more leisurely pace which included a pub stop on the 8 mile circular route.

Clive, chairman Terry Bewes who celebrated his 75th birthday the MG way by running the Grizzly cub and vice chair Sarah Watkins also celebrating a milestone birthday invited Wednesday club runners to a drink after the run too which was enjoyed by all. 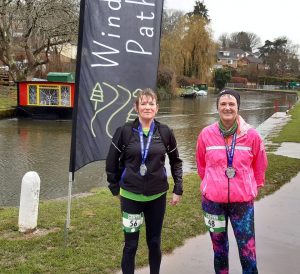 Jane and Jo in the rain

On Sunday Jo Earlam and Jane Hemsworth clocked up another marathon each, number 88 for Jo and 33 for Jane! The Mighty Greens took part in the Grand Western Canal marathon organised by Winding Paths. Jo and Jane were very pleased to receive their medals at the end and dry off as although they managed to avoid the worst of the rain it was very wet underfoot.