The SRC Juniors and coaches kick started the festivities by wearing Christmassy things on their last session before the Christmas break. They even had a visit from Father Christmas and his Elf who congratulated the 8+ and 11+ groups, handed out their end of term certificates and gave them all a present.

Next up was the Extremely Jolly Race on Saturday and the Escot half and full marathon on Sunday. These races through the woods and grounds of Escot are organised by Jolly Running and encourage festive fancy dress. The events are always popular because as well as river crossings there is an optional water slide and amazing finishers snow globe medals, buffs and for the Sunday racers a Georgie’s Pudding. 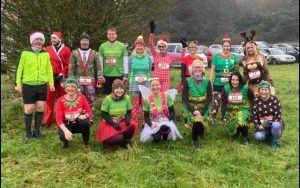 The 7.5 mile Extremely Jolly run was the most popular with 14 club runners entering; this was in part due to the Club’s Christmas do being held that night and the thought of running the next day was too much for some. Head coach Kyle Baker, though lacking in the fancy dress department, led the way and finished in 18th place in 1:11:14. Adrian Horne, Ollie Goodchild-Horne and Allan Kay were next over the line with soggy bottoms from the water slide with Helen Akay and Leeann Thomson not far behind with soggy, muddy bottoms and Judith Jeeves with a dry one!

By the time Beccy Johnson, Tracy Scannell, Alexa Baker, Jenny and Nikita Kay reached the slide there was a long queue and watching from the bottom saw fellow runners hurtle down past the end of the plastic sheet into stony mud, some going head over heels. This put them off and they decided they wanted to enjoy the Christmas party in one piece so continued running up the hill. It did not deter Ann Cole even though her run buddy Julia Haddrell had taken a fall in the woods earlier and she loved every second of it. There was a lot of festive banter between the runners and Jenny was serenaded more than once to ‘O Christmas Tree, O Christmas Tree’! 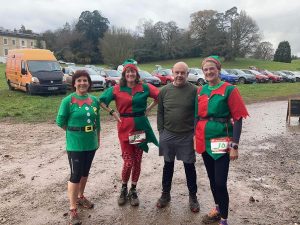 Extremely Jolly Half and Full Marathoners

Post party, Sarah Watkins and Paul Williamson lined up with Tom Knight to compete in the half marathon while Jo Earlam and Jane Hemsworth took on the marathon. 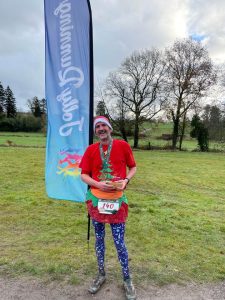 The ground was a lot muddier underfoot from the previous day but this did not stop Tom, wearing a very fetching tutu and Christmas leggings combo, storm round in 1:37:43 coming 3rd overall. Sarah Watkins (the Elf) crossed the line in 2:54:59 and Paul, who found it tough going with a foot injury, finished in 3:36:41. Meanwhile Jo and Jane were enjoying the scenery and friendly marshals as they kept on running completing the marathon, Jo’s 10th this year, in 6:38:12, finishing 39th and 40th out of a field of 46. They can eat a few guilt free mince pies now!