The Masterminds Behind The Sidmouth Running Club Lockdown Challenges

Sidmouth Running Club members are indebted to two Mighty Greens who have kept them focused during lockdown #3, John Chesters and Terry Bewes.
John Chesters has had the Ottery based members of Sidmouth running around the area searching for control points and testing their orienteering skills. He even added a route on Muttersmoor for the Sidmouth based runners to test their skills this week. John said he was pleased to help set the challenges and that it has been rewarding to see people having a go and even enjoying themselves!

With his wife and fellow Mighty Green Ruth, he tended to walk, rather than run, some of the routes used, but only to check details, or create a Strava trace to follow. Most of his planning has been from home, using his knowledge of the local terrain and path/track network. If he sees a path, he needs to know where it goes!John is looking forward to club runs starting again especially as during lockdown he’s found a few new places to show people! 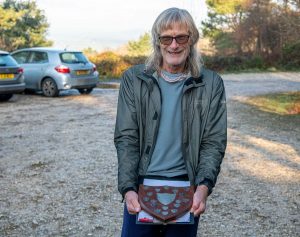 Chairman Terry Bewes found it a bit of a challenge to set 2 road runs and one off road run each week and then record the results, but when he sees 62 members submitting results it makes it all worthwhile, especially as most will be coming out of lockdown a lot fitter than when they went in.
Terry is really looking forward to getting the club back running together again in a Covid secure environment. 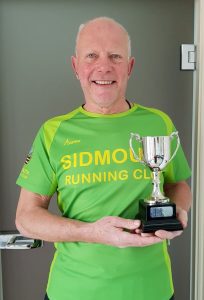 The runners certainly enjoyed one of this week’s road runs, a pub crawl taking in 18 past and present pubs, even though they couldn’t partake in a drink though Els Laureys was ready for a cider when she successfully completed the challenge. Antony Hall used his dad’s local knowledge to find out where the Horse and Groom was and Bert Dykema added The Red Lion in Sidbury to his route. 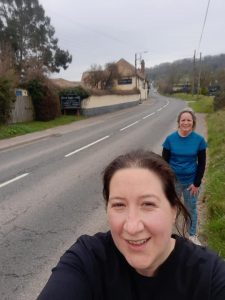 Beccy & Tracy on the pub crawl

The second road run involved hills though this did not deter Tim Swarbrick who ran 8.28 miles taking in the hill challenge twice! Karen and Christine Farnham surprised themselves when they finished that they had clocked up 7.5 miles, Terry Bewes combined the two road runs and ran 8 miles, Sam Ingram also ran 8 miles by combining 2 previous challenges together while Derek Blackburn combined the daffodil run with the pub crawl and ended up running a half marathon! 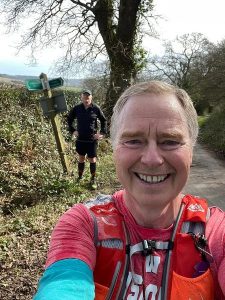 Jane Hemsworth and Jo Earlam had a good 16 mile training run in preparation for the Plym Trail marathon next month and Dan Prettejohn completed a half marathon by running 41 laps of a housing estate in 1.25.38 hours at 4.04km/min pace!

Christine Hellier ran a measured and effective route finding all 20 controls on the Muttersmoor OGLE, as did Jo Earlam whose map reading skills are improving. Finding 19 controls were Helen Akay, Terry Bewes, Jenny Kay and Alexa Baker (who found themselves in a prickly situation at one point!), the dynamic duo, Tim Swarbrick and Derek Blackburn, found 18 controls using thoughtful route choices, Mark Norton enjoyed the hilly exploration of the area and Brigid McSmith and Ann Cole with Ivey think they ran past 12 controls. 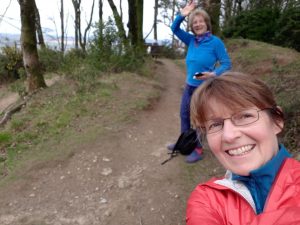 Liz Goodman and Alison Long ran last week’s OGLE and found 9 controls and despite printing off the map before heading up to Fire Beacon, Kerry Salter soon realised she had left it at home so enjoyed a relaxed run around the area instead.

Terry Bewes was pleased to receive the cup this week for having the most participants enter the Grand Western Canal 10k Clic Sargent virtual race at the end of last year. The next challenge is to try to retain it this year-watch this space.