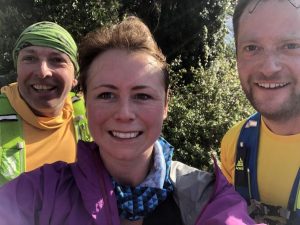 “Come on a training run down to Budleigh Salterton” said Sam, “get some nice flat miles in” said Sam, “easy going prior to The Grizzly” said Sam… So, early on Saturday morning with Adrian Horne and Sam Ingram we go into the Flood Lands of the R Otter writes Bex McDonald.
Meeting at Tipton St John at 07:30, the three of us set off down-stream along the River Otter. As we made our way out of the carpark and crossed over the river, we could see flooded fields. The river had burst its banks into the field to ankle depth. So began the theme of the morning, chilly, soggy toes! That’s fine we thought, after all, it’s all part of cross country running. By the time we reached the beavers dam just before Otterton, we were up to our knees having an ice bath on our calves! It felt quite soothing and again, that’s fine we thought… Little did we know! About a mile further down stream after Otterton, there is a foot bridge. Here the water was flowing fast and flooding into the field straight across the path that we wanted to take. We ventured in carefully and soon we were all waist deep! So, wet pants all round and numbed legs for the trek back to Tipton St John. Enough was enough and a unanimous decision was made here, to choose another route which would involve less river… a lot less river and only the odd puddle. One thing was for sure, we got our Grizzly training in!
Above: Adrian Horne (left) Bex McDonald (centre) and Sam Ingram (right) Grizzly training somewhere along the soggy banks of the River Otter on Saturday morning. Photo by Bex McDonald.