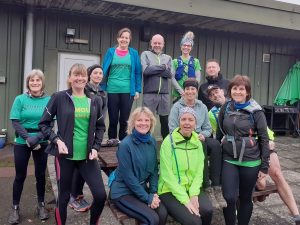 Fourteen members of the Sidmouth Running Club ventured out into the beautiful East Devon countryside to take part in The Blackdown Beast on Saturday the 25th of January.
This very popular event is a very sociable, non timed and self-navigating 10 or 17(ish) very muddy mile run that travels through some of the stunning Blackdown Hills.
The Mighty Green team members were Jessica Raynor, Sarah Watkins, Paul Williamson, Helen Palmer, Millie Frankpitt, Cathy Keast, Monica Reid, Richard King, Els Laureys, Jane Hemsworth, Simon Hollyer, Richard Summerhayes, Carine Silver and Alan
They all made their getaway from Dunkerswell at 10:00hrs and headed along 7.6 miles of infrequently used footpaths to Smeatharpe where a reward of a delicious hot pasty and some mulled cider was served up in the village hall. Then it was just a 2.5 mile jog along some lanes and country paths which dropped down into the village of Upottery. It was into the Sidmouth Arms where more sustenance was consumed. The 10 mile option finishes here and so did Millie who opted to jump on the bus back to Dunkerswell and head to Exeter for the rugby…mixed priorities here Milly! The 17 milers continued along the road to Rawridge where they turned right, crossed the river Otter and climbed to the top of the ridge to the viewpoint above Luppitt. Here they enjoyed a non-existent panoramic view of the grey sogginess mascaraing as the surrounding countryside, it was very wet and misty! However, it was just a short soggy 3 mile jaunt to the Luppitt Inn for yet more very welcomed delights that any self-respecting public house would have on offer. Lastly a 2 mile section, cross-country over the Luppitt Common and back into Dunkeswell for a very well earned drink and some more food at the race Hq.
http://www.honitonrc.com/blackdown-beast-jan.html