Sidmouth Running Club entered twelve teams into the Woodlands Relay which took place in the woodlands near Lea Croft Caravan Park, Colyton, on the evening of Wednesday the 19th of June. Organisers, Axe Valley Runners had to make a last minute decision, to have a shorter than planned route. Due to some fallen trees the planned circuit could not be used. This shortened the distance for each runner and instead turned it into an out-and-back race. The first 600m was almost flat with the next 600m(ish) section, being a downhill blast with a slippery u-turn at the bottom. This was the half-way point which meant that it was a very long climb back up to the top, and then a sprint to the finish. To avoid collisions, the runners had to run on the left hand side at all times. This worked very well with no reported incidents. The weather had been wet all week on and off, the ground was fairly good for most of the route, but slippery on the hill.
There was a great atmosphere on the start line and a huge cheer as the first runners headed off. It wasn’t long before they were back for the hand over with more high spirited cheering and clapping every time no matter who’s team was setting off.
Run Boy Three were the first Sidmouth team to finish with Steve Saunders setting off first and averaging a 10 minute mile followed by Rob Edwards and a very determined Tim Mitchell giving Team RBT a time of 29m10s. Chafing The Dream saw Chris Day Kerry gain a down hill 400m(ish) section personal best time of 1m39s and was followed by Charlotte Forrer and a flat out Sam Ingram. Team CTD officially finished with a 29m10s timing. First to get away for mixed gender team Grand Master Flash, was Simon Holyer who managed a fast 8:15min/mile pace followed by Richard King and Ronnie Masters to gain Team GMB a 13th place in a time of 29m43s. Catherine Hilton got The Runners Beans off to a flying start, with Claire `Ashby giving it all she could, especially up the long hill and then Kerry Boyle blitzed the last leg. Team TRB had fun but found it tough. However, they were the first all female MG team to be completely finished and achieved it in 29m53s coming 14th. The young at heart Young Sexagenarians were down to two men for this event, with Paul Mitchell and John Hanson who took on two of the laps. Tim Clay had to duck out with an injury. Team YS came 18th in 30m51s. Originally named by Paula Farrand, the Dream Team will have ‘er’ added to Dream for next years Woodlands Relay. First away for Team DT was Rocker Sheppard, who set the bar with an average 11min/mile pace for the team. Hamish Spence took off to chase down Team TTT’s Karen Farnham and very nearly succeeded on the downhill section, but Karen is an up-hill running demon and so it was over to Adrian Horne to take the baton. A time of 32m19s and a 22rd place (1 ahead of Team TTT) was achieved. Terry’s Talkative Trio comprised of Christine & Karen Farnham and Sarah Clapham and they all claim not to have uttered a single word during the race! Is that really possible? Of course it isn’t and the clock stopped when all three took a breath at 33m09s giving them 23rd place. All you need to know about the Sidmouth Green Goddesses is that they were absolutely fabulous…any questions…good 🙂 Introducing Team Ladies And Tramp and clearing things up for arguments sake, Sarah Watkins (Lady and first runner), Paul Williamson (Tramp and second runner) and Kerry Agar (Lady and fast runner). Team LAT came 27th in 36m21s. Going to quickly to be correctly named the Slow Motion Ninjas were, in order of disappearance and re-appearance, Julia Haddrell, Jenny Bentley and Suzi Rockey. They managed a combined time of 37m23s and came in 29th place. Named after three great women of a certain age, The Supremes, were Sarah Powell, Emma Grainger and Ann Cole. They all showed supreme grit and determination throughout the event to get to the finish. They came in 31st position, but by the smile on their faces, they certainly enjoyed themselves! Their time taken… not important, but they thank all the other Sidmouth runners for their fabulous support both on and off the trail.
An event thoroughly enjoyed by all with very high levels of SRC members supporting each other on the track and at the start/finish line. 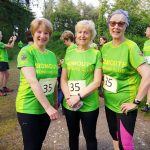 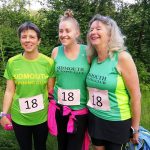 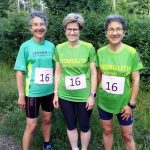 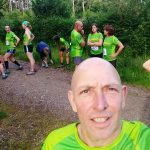 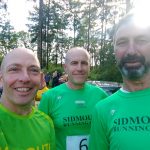 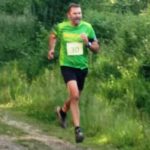 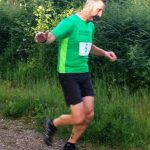 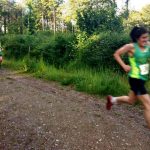 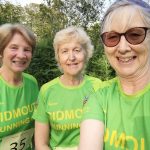 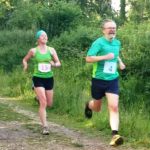 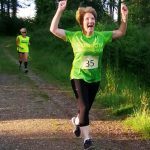