There were two current members and one ex member of SRC taking part in the 2019 London Marathon. Justin Ashby and Emma Cudd and (ex member) Hollie Robson.
Hollie who used to be a member of SRC, has on many occasions watched her Mum Becky run in the London Marathon. This year however, it was Hollies turn to give it a go. This was her first time and she ran a very consistent race, gaining a very respectable 4h00m26s time. Also a first London Marathon for Emma Cudd, who had a good race and kept up a steady 9.41 minute mile completing the route in 4h21m.
Justin Ashby achieved the 2h45m qualifying time from his last London marathon in 2017. This earned him a Championship place for this year. It gave him the privilege of assembling in a pen with it’s own marquee and loos with a warm-up area adjacent to the elites’ zone. So. with just a barrier separating him from Mo Farrah et al, it gave him inspiration to race hard.
A few minutes before the start time, Justin’s group were ushered forward to just a few rows back from the elite runners. With noise levels rising in anticipation, many runners started ditching their last layers of clothes and were stripping down to their vests. As the seconds counted down, Justin had a huge adrenalin surge and then he was off. A point worth noting, the last runners of the London Marathon crossed the start line up to 1 hour after the elite race starts. In Justin’s case, he was over the start line a mere 10 seconds after the elites got going!
Justin’s last three marathons have been based on the tactic of holding back on the outward half and running the 2nd half slightly quicker. This is one recommended way to do it. However, this time he thought he would push things on a bit for the first 15 miles, then try to hang on. And boy, did he hang on. He did not let up and managed to sustain a 2 minute 30 second (ish) gap behind Mo Farrah. It’s amazing how quickly the human body and mind can evolve in the course of a marathon. Justin flew through that first 15 miles feeling brilliant, but by mile 18 he knew that he was going to have to really dig deep.
Digging deep now, he did slow down, but not by much and therein lies the benefit of a lot of hard work in training and preparing mentally for this race. Never underestimate being mentally prepared! Staying positive and mentally strong are key to a good marathon. Justin has learnt a lot about this over the last 10 years, this being his 5th London Marathon. Whilst he wasn’t crawling over the finishing line, he was very pleased to get to the end.
This was Justin’s comment on his marathon tactics, “I think this year, my tactic of racing a swifter first half made it more difficult for me but, overall, it was a successful outcome as I secured a new PB and inched the club record further forward”. This is a record which he has proudly owned since London 2017. So for any other budding Mighty Green runners, you have your target if you think you are fast enough.
He also conveyed his thanks to his support team led by Claire Ashby, who helped him keep on track. It was her idea to get him training on a treadmill though the winter and it proved invaluable for tempo training and improving his cadence and form.
Justin secured an overall time of 2h40m59s with his outward half being 1h19m24s and returning half 1h21m35s. His average pace was 6:08 minute miles. At the moment Justin is not looking for reasons to go back and do this all again. However, next year he would enter the M50-54 age category and if he ran the same time again, he could become a Top 10 age-grouper. 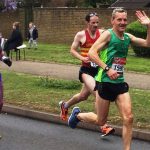 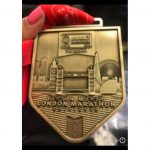 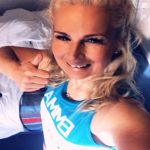 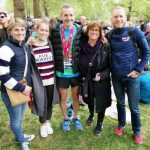