JP’s Exe to Axe 2019
The JP’s Exe to Axe is a grade B fell race and has been described by Runners World as a brute of a race with outstanding views. The route follows the Coastal Path and offers the runners a little under twenty two miles of the beautiful Jurassic Coastline an AONB. It is needless to say a very tough route with approximately 3800 ft of elevation gain.
Planning the 17th annual Exe to Axe has been in progress for 12 months and was led by David Lee the Race Director, with Rob Edwards as Race Officer and past Race Director, Paul Mitchell. This year as in previous years, Race HQ  was at the Exmouth Life Saving Club and was opened at 08:00 in readiness for the early runners. Two seventy seat coaches arrived early, having transporting runners from Seaton the finish, to the start line at Foxes Hole Car Park in Exmouth. The seafront was buzzing with excitement as the runners prepared for the big race. Rob and Sue Edwards (time keepers) arranged the race number issue, accompanied by several members of his family including young Stanley, Belinda and Katy. Julie Mitchell and Ashlyn Lee processed the runners before going on to Seaton to prepare for the end of the race. 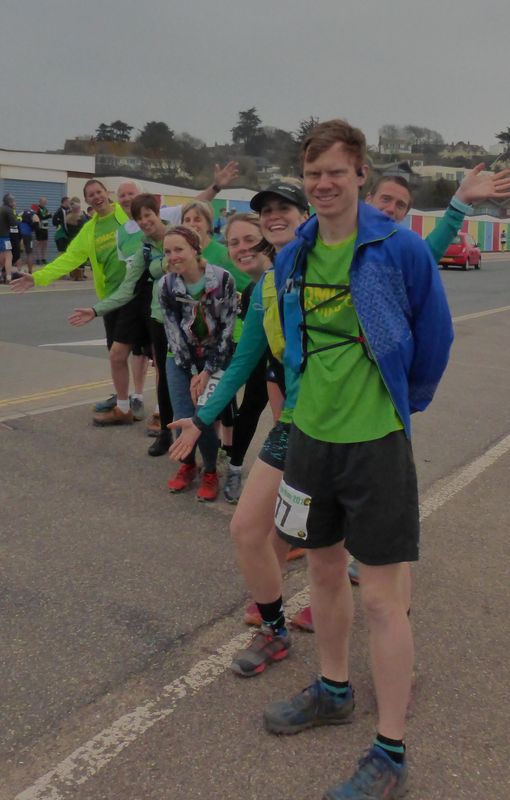 JP’s Exe to Axe has a 6 hour completion time, so to help slower runners an early start is offered and 25 runners took advantage of this option. Time keeper Colin Flood, who has undertaken this important role has performed this duty for the club for many years. Dual recorders are used and are calibrated before the event. Three hundred and twenty five runners registered for the race this year, with some sensibly opting for a race deferral due to late injuries. Hamish Spence, SRC Press Officer reported and Kyle Baker photographed the preparations and then set off around the course with Head Marshall and referee Tim Clay with our First Aid responder provided by Rapid Emergency Medical services. 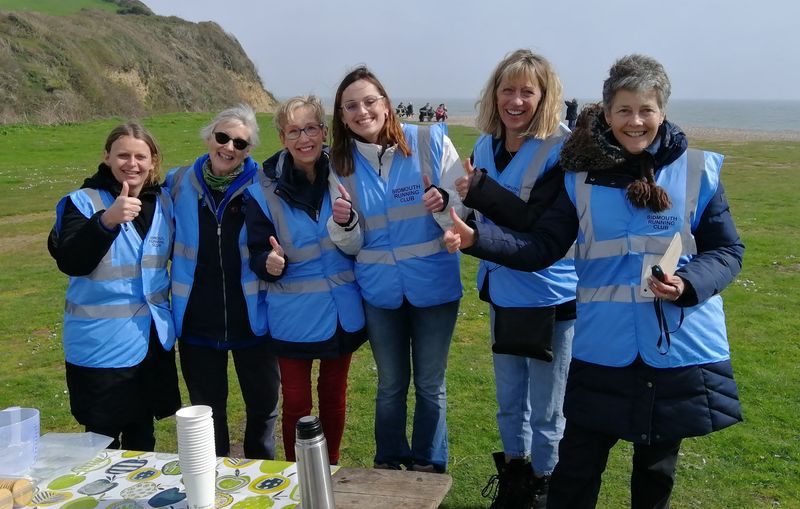 The race starts at Foxes Hole carpark on the seafront of Exmouth and heads to Budleigh Salterton. This section is the flattest and can lull the competitors into a false sense of ease. Section two takes a turn inland for a tour along the River Otter estuary and then on along the coastal path to Sidmouth Sailing Club. This is the halfway point and the runners can stock up on provisions. The relay teams do their hand overs at this point. Section three is the toughest, throwing the runners into a long steep hill immediately with plenty more to follow all the way to Branscombe Mouth. The last section goes through the village of Beer and finishes along the Seaton Promenade at the Axe Valley Sailing Club.
The first small group (25 early starters), including Mighty Green Jennifer Bentley who continues to raise funds for HCPT group, were all sent on their way at 09:00. This group has an extra hour, 7hours in total in which to reach Seaton.
The second race started promptly at 10am with those going half way, those doing the relay and the full Exe/Axe race. With good running conditions, grey skies, dryish under foot and a head wind. all 244 competitors got on their way along the seafront to the zig-zag (bottle neck) narrow slope. Those that wanted good time-keeping sprinted to that point. 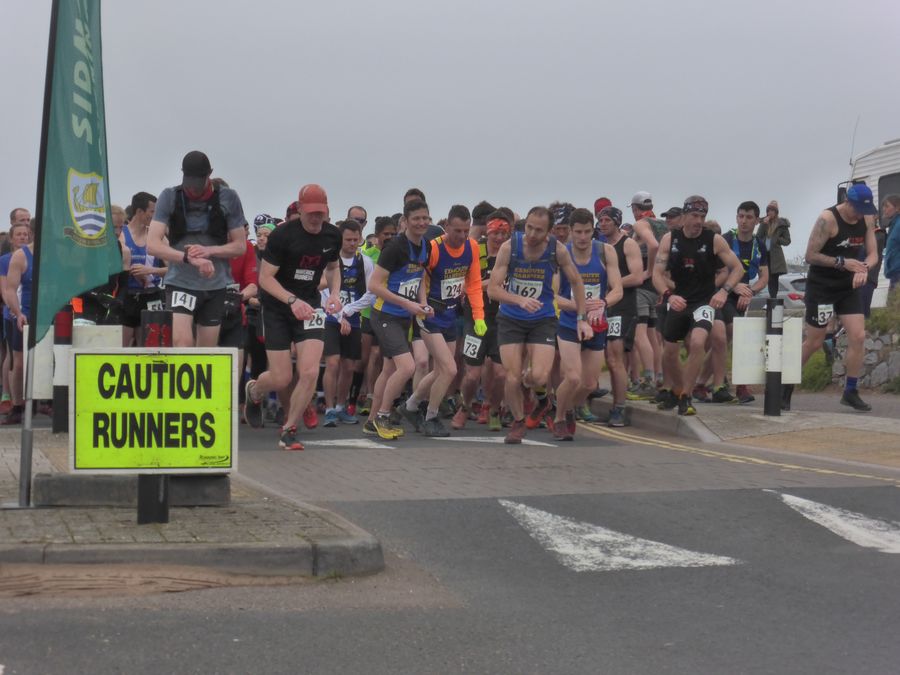 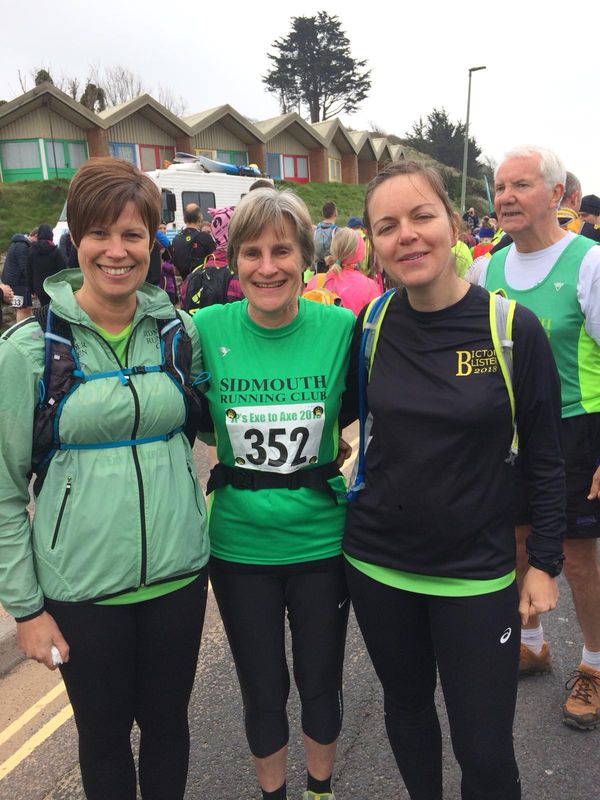 In the relay race there were four Sidmouth teams
Kat and Antony Hall (SRC Team Hall) with Kat doing the first half and Antony doing the second they came in 5th place in 3h56m33s.
Sarah Ginsberg and John Doherty (Pair-a-greens) Sarah had to make haste and improve their time keeping as John was so busy high fiving the marshals and getting group hugs at Budliegh! I think he had eaten to many Jelly Babies. These two came 11th in 4h36m58s
Auther and Christine Vince (Sidmouth Ancient and Dazed ) Although they completed the route, they unfortunately they missed the shut off time. There were 13 teams.
The event was officially closed at 16:00 however the last runner did not finish until 16:30 . The last runner, Back Marker and Marshall Danny Painter, one of the quickest runners in the club undertakes this job every year. It is a difficult task, as he needs to ensure all runners are accounted for who may stop around the course and to keep motivating the last competitors to make it to the end.
Paula Farrand and daughter Amelie were in charge of awarding medals to the winners supported by Ashlynn Lee and Julie Mitchell who were issuing snacks and drink. Colin Flood and Alexa Baker who transported the runners baggage from Exmouth to Seaton also timed and registered all returning runners as they arrived. They did a fantastic job with a constant stream of runners for three and half hours.
A really well organised race and awesome support from all the Marshall’s and other mighty green members.
Results, full distance 6h cut off: Record breaker Kirsteen Welch 1st SRC, 1st Lady past the post in 3h:07m:56s – Mark Souter 70th 3h:47m:45s – Jim Forrer 75th 3h:50m:22s – Jessica Raynor 79th 3h:52m:45s – Nicola Dowsing 144th 4h:24m:45s – Charlotte Forrer 146th 4h:25m:05s – Jess Trim 147th 4h:25m:09s – Simon Hollyer 148th 4h:25m:14s – Colin I’Anson 159th 4h:30m:45s – Lynda Hawkins 181st 4h:46m:13s. Full distance, early start: Jenifer Bentley 224th 5h:36m:23s.