The Exmouth Express 5.
The Exmouth Express 5 took place on Sunday 3rd February. The event was organised by Exmouth Harriers Amateur Athletic Club and sponsored by Climb South West. With a cold but sunny morning at 10am, 11 Mighty Greens got off to a fabulous start from The Strand with a loop around The Parade, then twice along the Esplanade and twice along Rolle Road. 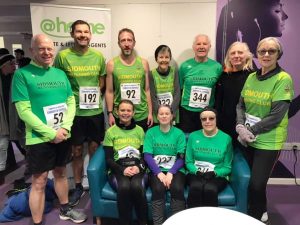 Antony Hall did extremely well considering he has been out of action due to an ongoing injury. Dispute a twinge all the way around, he kept an average pace of 6.14 minute/miles, crossing the line in 36th place in a time of 31m40s. Antony was the first SRC runner over the finish line. David King was next, claiming the 100th slot in a time of 36m12s. Then, in 153rd was Tim Swarbrick who completed the route in 40m13s. Hot on Tim’s heals in 160th was Steve Saunders, with a time of 40m48s. John Sharples, who had his family cheering him on from various points around the course, made it back in 210th place in 44m31s. Cheryl Boulton was very pleased with her 9.15 minute/mile pace and finishing time of 47m13s which gave her 245th over all. However, John Doherty almost pipped Cheryl to the post, with just 4 seconds between them. John was in 247th with a time of 47m17s. Not far behind Cheryl and John was Carolyn Sinclair in 255th in 47m48s.
Jodie Hawkins anticipated the route would be easier than it turned out to be and felt that perhaps complacency had set in with training. However, in front of two very supportive families (her own and some MGs) she achieved a good time of 49m39s and took 265th. Emma Grainger found the route a challenge, but with the sun out the town looked cheerful and the slight hill down Rolle Road was a very welcomed section. This helped to keep her spirits up both times around, so much so, that she managed another 1st in the FV65, that’s 2 out of 2 this year. Emma came in 288th in 53m14s. Sweeping up and refusing to be beaten was Mighty Green, Sue Cunningham in 298th place in 55m40s.