Last Sunday saw the 18th Four Trigs challenge start with over 100 runners setting off across the seafront in sunshine. The challenge is a self navigated run to each of four triangulation points circling the Sid Valley with start and finish at the Sailing Club. This year the route was clockwise, with runners checking in first at High Peak, then making their way across Mutters Moor then down through Harpford woods before climbing to the second Trig at Fire Beacon Hill. From here the trail runs inland to White Cross then drops down into Sidbury before climbing the other side of the valley to Trig 3 at Buckton Hill. From here a dip down in Harcombe is followed by a climb up to the Donkey Sanctuary and out to Trig 4 at Weston Cliff. This is the last Trig but the final leg, physically and psychologically the hardest, is still to come. The trail dips down to Weston Mouth then up to Dunscombe Cliff, down to Salcombe mouth, up to Froggie Rock and then finally down in to Sidmouth . This tough route is around 17 miles in distance and involves over 4000ft of climb, so is not for the faint hearted.

Hosted by Sidmouth Running Club and raising funds for CRY (Cardiac Risk in the Young), this friendly and sociable event attracted strong contingents from local clubs Sidmouth and Axe Vale as well as runners from Hampshire, Dorset and Wiltshire. The event was Organised by Marion and Rob Hayman who were well supported by a team of 10 marshalls on the course and 2 counting runners back in. 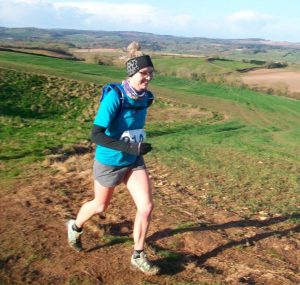 The first man home was James Green from Axe Vale Club in 2 hours and 13 minutes and first lady home was Jessica Raynor from Sidmouth Running Club in a spectacular 3 hours and 2 minutes. Jess’s running has gone from strength to strength powered on by her early morning training regime, designed to fit around the demands of a young family.

Sidmouth showed real strength in depth with Mark Soutar first Sidmouth man home (2h 52m), Nigel Maer chasing Jess down closely followed by Gary Anning and Julian Bartlett. Great runs from a big Sidmouth contingent including husband and wife team Charlotte and Jim Forrer came in next in under 3h 40m, and 10 minutes later Claire Ashby came in alongside Kerry Boyle (working on her marathon training), and Claudia Barry back from London to enjoy some Devon mud. The Keasts were out in force with Nick outrunning older brother John, who had to comfort himself with a better time than daughter Ellie, for now.

In the meantime Sidmouth’s social runners also delivered solid success on the day. Lynda Hawkins, accompanied by daughter Jade, came in at 4h32m time, entertaining fellow runners by carrying, Penelope Pitstop style, a lipstick, mobile phone and usefully, a charger. The Rusty Runner contingent smiled all the way round and Janice Ranson, egged on by Terry Bewes, got over her doubts after Trig 2 and saw the race through to the finish.

Marion Hayman was pleased with how the event went. ‘Weather conditions were so variable’ said Marion, ‘we had hail one moment and sun the next, and of course plenty of mud. It was a great atmosphere with plenty of marshalls and four people in the kitchen making delicious cakes for the runners. We are so pleased we raised £1,570.25 for CRY with entry fees and donations’.

Full results can be found here.