This race makes the most of Bristol’s picturesque backdrop. Largely flat, the route shares much of its course with the half marathon. Starting and finishing in Bristol’s historic Harbour side, it takes in the stunning Avon Gorge, and twice passes under Brunel’s famous Clifton Suspension Bridge returning via Spike Island and the Cumberland Basin.

Taking a road trip up the M5 neatly turned out in their new Mighty Green shirts were two of the clubs newer members determined to do the club proud in their first race in club colours and they did not disappoint. Jodie Suzanne Hawkins finished in 1:06:11 and Julia Haddrell in 1:16:00. Julia was another member of Justin Ashby’s 10k training course and she thanked him for pushing her well out of her comfort zone which enabled her to achieve that time.

Meanwhile nearer to home Suzi Rockey put away the books she had been studying over the last few months to become a Legal Genius and put on her Mighty Green to run the 5k Land and Sand race in Exmouth and finished in a respectable 30 minutes. 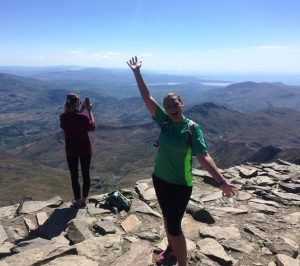 Further afield, James and Emma Salter were in Wales for a wedding and took the opportunity to run up Mount Snowdon as you do. After a heavy night celebrating, James reached the top in 1:11:00 and Emma in 1:53:00. The weather was glorious and the views from the top were panoramic.