Back in October Sidmouth Running Club member Adrian Horne saw a Facebook post advertising a fundraising challenge by the Royal British Legion called The Tommy 10k. The challenge was from the 14 October running through to the 14 November, although it has since been extended until the 30/11 because of its popularity.

The challenge was to either run a 10k, run 4 x 10k or 10 x 10k over the month. Sticking to the original dates this Mighty Green chose to try and complete the 10 x 10k adding in an extra challenge by running them on consecutive days. He planned to start the runs on 2nd November so he would complete them on Armistice Day. Adrian said, “Having never run on more than 2 consecutive days I knew this was going to be a real challenge for myself.”

A donation page linked directly to RBLI was set up with a target of £100 which was quickly surpassed. Over the month, with some massive support from his partner, Annie, family, friends and SRC members, he managed to complete the challenge and midway through, not feeling too bad, he decided to see if he could run 200k in the month.

Adrian, a club run leader, clocked up an amazing 226.6k or 140.84 miles, raising to date £1,015.00 for the Royal British Legion, which like many charities have suffered this year. Adrian, feeling very humbled by people’s generosity in such difficult times would like to thank everyone from the bottom of his heart who shared his FB page or donated to this worthy cause.

There has been lately a tradition of turning up at the wrong locations for the Wednesday runs. But the Ball family have taken this to a whole new level mistakenly heading for Crackington Haven. By a strange coincidence they met their son there running the Crackington to Tintagel leg of the coast path as part of Bristol Southmead Care Unit coast path marathon. 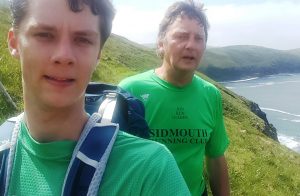 So donning the Mighty Green, Jon joined his son Geoff to complete the 19k in just under 3 hours. This was an excellent time given that there was over 3500feet of climb on this section. The support team of wife Penny and daughter Caroline brought much needed liquid refreshment and food from Tintagel for lunch at Ladies Window. It was a wonderful run at this time of the year with the spring flowers, butterflies and the oh so blue sea.

The Southmead ITU group will be running Exmouth to Sidmouth on 29th June and Sidmouth to Seaton on the 30th. How about donning your Mighty Green and joining them?

Latest entries into the Mighty Green on Holiday Challenge come from Tony Velterop wearing the Roosendaal Windmill in Holland as a hat and Suzi Rockey floating on the sea in Turkey and Greece.