The Beginners Are Progressing Quickly
Having completed their three mile, non-stop run last Wednesday evening (9th January), Jane Stein, Nikki Gosney and Lee-Ann Thomas all received their 3 mile certificates from Head Coach Tim Mitchell. They had no idea of the events that would unfold in the evening that lay ahead writes Hamish Spence.
The three ladies ran with the beginners group to give moral support to the five other group members that were taking on the non-stop 3 mile challenge.
As the group headed along Livonia Road, one of the ‘challengers’ became unwell. So, with some quick thinking and without anyone stopping, Nikki made the very helpful call to lead the others in the group on around the route. This enabled another five more members of the Beginners Group to complete the non-stop three mile course, while Jane, Lee-Ann and Terry looked after the casualty.
Happily, it all turned out well and Terry said a sincere thanks to our three new members who absolutely embody our ethos at SRC. Without their quick thinking, the evenings attempt would have been thwarted. 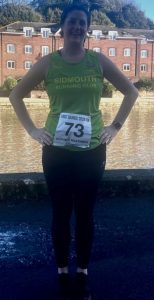 ra Broughton blasted her previous time at First Chance 10k to pieces on Sunday 19th of January.
Eight years ago Laura Broughton entered into her first ever running event, the 2012 First Chance 10k. On Sunday the 19th of January this year, Laura revisited the event. This race is a fast, pancake flat 10k route around the Exeter Riverside Valley Park, an ideal place to establish a personal best time. Laura did not disappoint on that front. On a crisp, cold but sunny morning she powered her way around the route and crossed over the finish line in 55m16s (Strava time). This bettered her previous time by a staggering eleven minutes. Well done Laura, that was a Mighty Green effort.
Report by Hamish Spence
http://www.swrr.co.uk/first-chance-10k/