Sidmouth Running Club held their adult awards evening at The Bowd Inn whilst the juniors were presented with their awards at the end of their last session before the summer holidays.

The club has introduced a series of challenge awards in place of individual trophies to encourage members to represent their club and support local events.  Nationally, since covid and the cost of living rising, there has been a decline in the uptake of race entries with many events having to be cancelled.

The first series for the adult members was to run in the full Grizzly or Cub, the 4 Trigs or 2/3 Trigs, JP’s Exe to Axe or Sidmouth to Seaton and the Blackdown Beast with two awards, the East Devon Triple Crown for completing three events and the Quadruple Challenge award for completing all four. 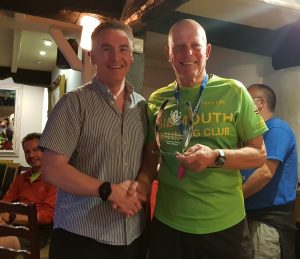 On Wednesday evening parents where invited along to watch the Junior award presentation in the sports field of St Johns School.  There were five events for the juniors to enter, Exe to Axe fun run, Ottery fun run, Beer fun run, Otter Rail fun run and the Woodland relays and Mighty Green John Dunsford ran them all. 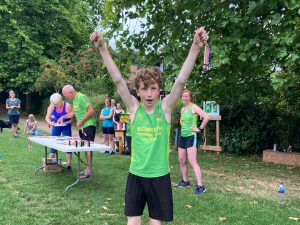 Awards were presented in front of parents, leaders and helpers.

As chairman Terry Bewes presented their awards he thanked the children for their commitment training each week and how proud the club was to see them representing it at these events.  Terry also thanked the parents and the Junior leaders and helpers who give up their time to support the next generation of the club.  Terry took the opportunity to present Tim Daffron with a bottle to thank him for all his help leading the junior Sunday runs. 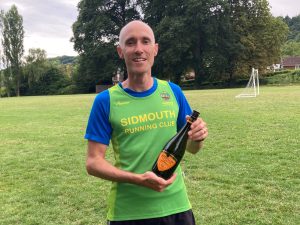 There will be a taster session on Sunday 11h September at St Johns School for anyone interested in joining the Mighty Green Juniors 8-11 years and 11+.  Please see the website for further information. www.sidmouthrunningclub.co.uk