When SRC’s Kirsteen Welch travelled up to Wales to compete in the UTMB World Series Ultra Trail Snowdonia 50k, she hoped to finish in the top three having changed her training to include more hill work.  The Mighty Green had an exceptional race helped by following advice and fuelling up during the event to avoid muscle cramps that she has struggled with in the past when racing in the mountains. Kirsteen finished 1st female and 8th overall in 6:23:34 and was over the moon to be on the podium alongside incredible athletes. Kirsteen is very grateful for her family’s never ending support and to everyone who is sharing her running adventure. 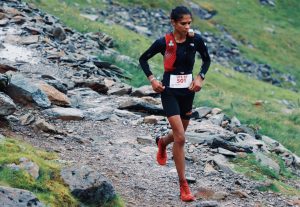 The only way is up for Kirsteen (photo by David Miller)

What a difference a year makes for the Otter Rail and River Run which took place on Saturday. Long gone were the memories of being knee deep in mud and instead finding shade was a priority!

The event is organised by Tipton St John Playing Field Association in conjunction with Sidmouth Running Club and is based at Tipton St John playing field where the Jackie Box fun run took place first at 10.30am with 10 Mighty Green Juniors taking part. 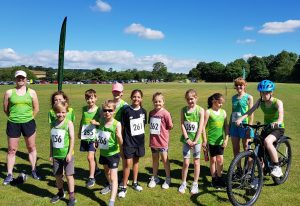 They all enjoyed the warm up taken by SRC Junior helper Catherine Hilton before setting off on the mile long off road loop. 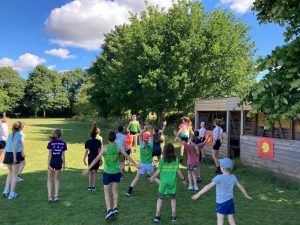 Barney Baxter was second over the line and first SRC junior with the others following not far behind to loud cheers from parents and SRC supporters. 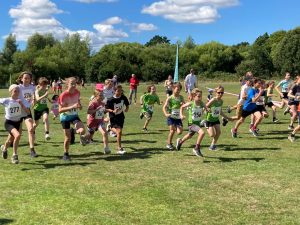 And they are off-Junior Fun Run

At 11am, following a warm up by SRC’s Alexa Baker, 42 Mighty Greens lined up at the start of the 10k race looking forward to reaching the shade of Harpford Woods.

The route is very picturesque, alongside the river (which was looked at longingly!) through Harpford Woods, along the old railway line, back towards Tipton, through fields out to Fluxton and along tracks back to Tipton.  Mark Andow was the first SRC over the line in 49:45 in a field of 205 and not for the first time MG Catherine Hilton was the first local woman over the line in 53:27 and was presented with a trophy and prize. Special mention to MG David Wright who ran the route earlier in the morning to check the signage then took part in the event.  Race director Jemma Wiltshire did a fantastic job reminding runners to take on water at the 3 water stations on the route, but the heat certainly tested the runners.  Thankfully dizziness and nausea were overcome and the juicy oranges at the finish were much appreciated as was the bottle of Otter Brewery Ale all runners received. 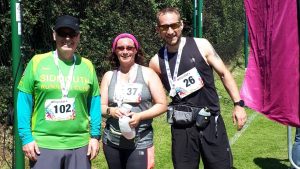