Brenda Perratt presented £250 to Teresa Loynd of Woolbrook News, the organiser of aid for local Ukrainian refugee families on Thursday. 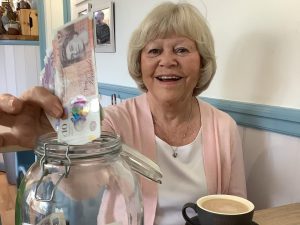 Brenda Perratt puts the donation into the jar at Woolbrook News

This was part of a larger sum raised by Sidmouth Running Club’s annual JP’s Exe to Axe Race. Brenda’s late husband John was the inspiration and organiser of this race over many years. The club are very grateful to David Lee, race director, Paul Mitchell and Rob Edwards, the organising committee as they were instrumental in the decision to support the appeal. Teresa is doing a fantastic job locally, making the community aware of useful donations needed eg clothes, bikes, school uniform and by providing a networking hub. 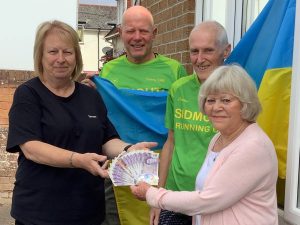 The club donated a further £2,200 to the Red Cross Ukrainian Appeal which included £100 donated by the club auditor Jeanina Puckey and £100 was also donated to the RNLI on behalf of Axe Yacht Club for the use of their club house on race day.