On Sunday morning while several club members were supporting Ottertons’ Open Garden event, Kirsteen Welch and Carol Hounsell took to the streets of Paignton to run the Torbay half marathon.

Mighty Green Kirsteen ran hard tempo in preparation of next week’s Ultra Trail Snowdonia, part of the UTMB World series where elite runners compete for guaranteed places on the start line of OCC-the UTMB World Series Finals.  Despite the undulating 2 lap course and 20mph wind the Mighty Green finished in 1:21:24, first female overall and 8th out of a field of 635 runners.  Kirsteen said the atmosphere was fantastic with lots of support on the course from marshals, spectators and fellow half marathon and 10k runners. 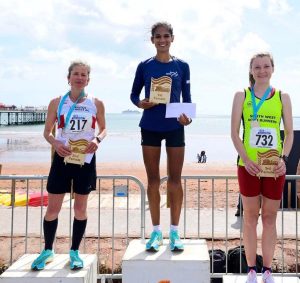 A Delighted Kirsteen Welch On The Podium

It was Carols’ first half marathon which she thoroughly enjoyed and was very happy with her time of 2:27:04.  Carol is busy preparing for her Hospiscare charity place in the London Marathon which takes place in October. This means the Mighty Green has to fit in fundraising events to meet the £2,000.00 target alongside her training program, the next one being a disco in Alphington, Exeter on Saturday 23rd July. If you would like to support Carol and Hospiscare please follow the link www.justgiving.com/fundraising/carol-hounsell1 . 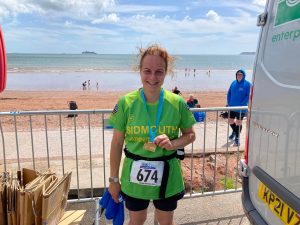 Carol Hounsell Was Very Happy With Her First Half Marathon

Derek Blackburn had cause to celebrate at Cranbrook park run on Saturday in his volunteer role as 30 minute pace marker.  It had taken 11 park runs in this role to finish spot on 30 minutes and he was over the moon!  Can he do it again? 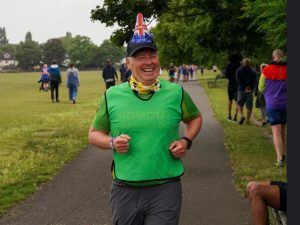