There was excitement and anticipation in the air as Sidmouth Running club gathered by the Mighty Green flag on Sunday morning at Ottery Cricket Club. Honiton Running Club’s Ottery 10k and fun run meant that the whole of the club could be represented and there were 16 juniors and 19 adults raring to go. The juniors were much more enthusiastic with the group warm up because the sun appeared through the clouds and the 10k runners were quickly removing layers, finding hats and applying sun cream-it was going to be a hot one! 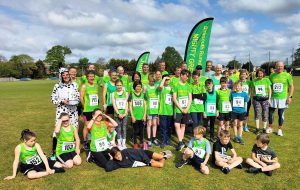 Having encouraged the adults on their way the junior lined up for the start of the mile fun run. Cheered on by junior head coach Kerry Boyle, family and friends, the junior Mighty Greens did their club proud with seven finishing in the top ten. Isaac Corfield came in first, Dom Hall second, Barney Baxter third closely followed by Ella Bond, first girl in fourth place. Seth Lancaster, Arden Chipping and Flynn Lancaster weren’t far behind finishing 6th, 8th and 9th respectively. A huge well done to them and to Hamish Bishop, Marcus Wieffer, Ellie Jamani, Ella Chipping, Amalie Baxter, John Dunsford, Louis Bridges-Galvez, Jessica and Jasmine Thomson who all ran well and for some of them it was their first event representing the club. 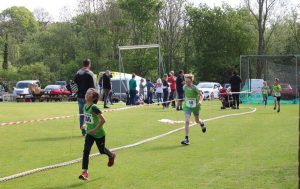 The mainly flat 10k route took the runners past Otter Nurseries, a loop around Taleford, two visits to Patteson’s Cross, Fairmile, Cadhay Barton and Kings School before finishing back at the cricket club. The highlight for many of the runners alongside the friendly marshals was the kind gentleman two thirds of the way round who had his hosepipe out spraying them as they ran past. It was much appreciated! 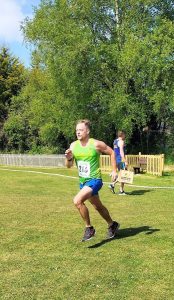 Sam Ingram was the first Mighty Green over the line in 49:37, with Clive Gilbert hot on his heels in 50:01. Naomi Garrick sporting her fundraising Dalmatian costume became a hot dog but said it was all worthwhile thanks to everyone who donated money into her dog bowl before and after the race. The club’s social secretary raised £62 for animals in Ukraine.

The Cricket Club was the perfect location to spread out in the sun, cheer the runners over the line, relax and enjoy the refreshments. What more could you ask for!