On Saturday Climb South West held their second Sid Valley Ring half marathon starting and finishing on Sidmouth seafront. Five Mighty Greens entered and 3 finished in the first 11! Antony Hall knocked 8 minutes off his time from last year and came in 4th overall in 1:51:08, Oliver Goodchild-Horne 9th in 2:01:15 and Colin Ryan 11th in 2:09:33. Rob Edwards and Ann Cole finished in 2:44:55 3:43:28 respectively. Colin said he really enjoyed the run; no mud, little rain and free beer at the end! 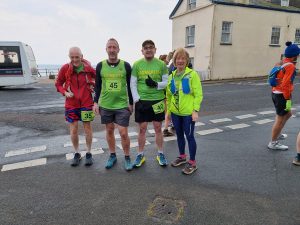 MGs at the start of the Sid Valley Ring

Mighty Green Darren Pearce took on the Salcombe Trail Running Challenge starting and finishing in Kingsbridge. Darren completed the SWCP half marathon in 2:30:00 which although challenging with 2105 feet of elevation and a very strong head wind he enjoyed the beautiful scenery. 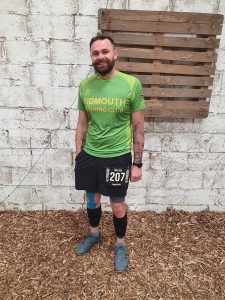 Junior MG Ben Barnard and his MG mum Rachel took on the Inflatable 5k challenge at Westpoint on Saturday and met a very colourful MG, Ross Walton. They had great fun running, walking, crawling and bouncing their way around the course. 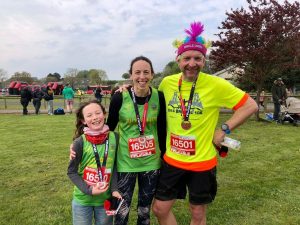 Then on Sunday, Rachel ran the 32Km Devonshire Dumpling, organised by the Long Distance Walkers Association who also welcome runners. The MG enjoyed the fab route which started and finished in Budleigh Salterton visiting Mutter’s Moor, Harpford Wood, Otterton and East Budleigh. Rachel was very happy to discover fellow SRC member Mark Andow was also running (the 52K route) and enjoyed the Mighty Green company until the first checkpoint where the two routes split. Mark’s challenging route took him from Budleigh to Littlecombe Shoot then inland to Street, Sidbury, Harpford, Otterton and East Budleigh with 2165m of climb! 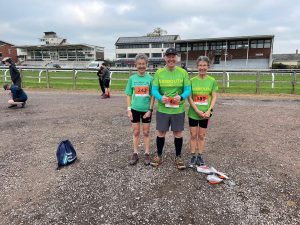 Sidmouth Running Club was represented by 3 members who took part in the Blackdown Hills 10k Trail Run, organised by Prosper Events. Christine and Karen Farnham had to watch their footing as they ran through crop fields as it was hard going underfoot. Despite missing the turn off point for the 10k/half marathon split, Christine finished in 1:03:52, just ahead of her sister who finished in 1:04:50. Fellow MG, Derek Blackburn found the route which started from Taunton Race course fun but hard work and finished in 1:14:51. 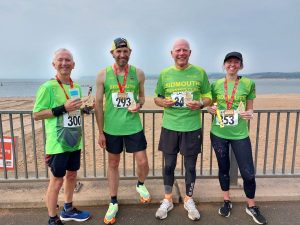 Closer to home 8 MG’s lined up on a damp chilly Exmouth seafront to compete in The Clinic Maer 10k and half marathon organised by LME Events. The 10k route took you through Littleham and back to the seafront while the half went on to Knowle, Budleigh Salterton and back along the coast path with nearly 1000 feet of elevation. Jamie Locke was the first MG over the line in the half marathon in 2:05:42, 18th out of 55 finisher, Stuart Moul finished in 2:17:15 and Gail Goldsmith in 2:41:56-first in her age category. There were plenty of prizes for the 10k runners, Niall Hawkins knocked 30 seconds off his PB and came in 3rd overall and 2nd in his age category in 40:56, Pete Norman finished in 11th place, 1st in his age category in 47:29, Yasmin Salter was 4th female and 2nd in her age category in 52.50 and Terry Bewes was 1st in his age category in 1:06:53. Alexa Baker was just pleased to finish in 1:06:49!