Sunday was a great day for Sidmouth Running Club where all the hard work behind the scenes paid off as the inaugural Junior Fun Run took place during the main JP’s Exe to Axe race. 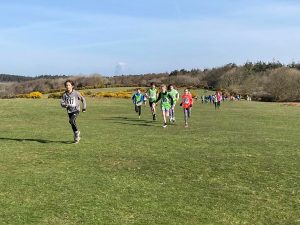 Starting from the top of Mutters Moor 42 children charged across the field joined a SRC adult runner through the woods and road section to the top of the daffodil field then ran down the zig zag path along the millennium walkway, across the prom, around the playpark to the finish line. 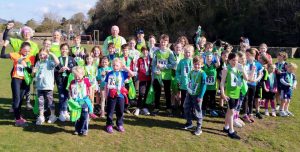 Chairman and fun run organiser, Terry Bewes, congratulated the youngsters on making their club proud and thanked the adult runners and marshals, many of whom went on to either run the Sidmouth to Seaton half of the Exe to Axe or marshal the main event. Junior coach Kerry Boyle said it was a glorious morning for the first ever JP’s Exe to Axe fun run and all the children seemed to enjoy it too. 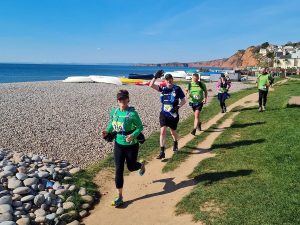 Over in Exmouth there was a rolling start between 9.30 and 10am as over 140 runners began the demanding 22 mile coastal challenge to Seaton.
Hamish Spence wasn’t the only Mighty Green to take a tumble but carry on regardless along the scenic if slightly hilly (3900ft of elevation!) route. As Cath Miller put it, brutally beautiful! 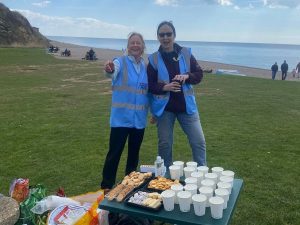 Jack Wilson found himself out of his comfort zone especially when cramp set in the other side of Branscombe when his water ran out. He was very grateful to the kindness of fellow runners who offered him salt and tablets which made him determined to finish. On crossing the line Jack declared it was one of the best experiences ever! Ollie Goodchild-Horne was the first of 20 SRC runners over the line 44th out of 142 finishers of the full Exe to Axe in exactly 4 hours. We were all pleased to see Simon Hollyer looking much perkier at the end than he did last year and despite only just recovering from covid he had a PB too! 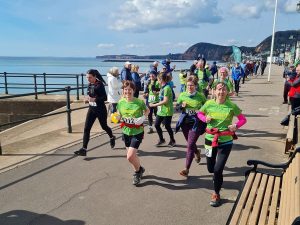 Sid to Axe runners starting out

At 11am the entrants to the Sidmouth to Seaton half set off including 14 Mighty Greens. Brigid McEleney-Smith thoroughly enjoyed the run coming in 5th place out of 25 finishers in 2:20:08.

All the club runners appreciated the views of where they were heading and where they had been, the weather was perfect and underfoot was dry but having the support of the marshals, mostly SRC runners themselves, along the route sometimes in the middle of nowhere really made a difference. Their support and encouragement really helped and Jo Earlam was a perfect back runner.

It was a very well organised event with all profits going to the Ukraine.