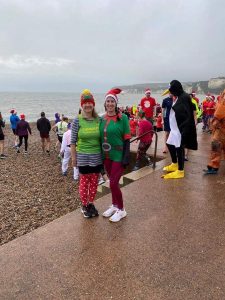 Whilst the turkey was cooking, club members David Skinner and Julia Haddrell plus her daughter Alex, took the opportunity to wear fancy dress and take part in the Seaton park run while Derek Blackburn with his daughter Grace lined up in Bushy Park with 1,600 park runners! Further afield in Vancouver, MG Tim Swarbrick managed to get a Christmas day run in as the weather had finally warmed up enough! 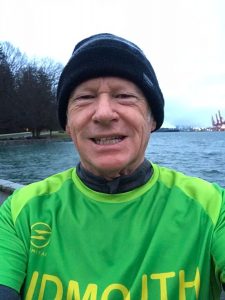 The Boxing Day runners gathered in the rain but set off under a full rainbow determined to burn off a few calories and make room for more festive food! Any fancy dress was soon taken off as it was unseasonably warm and Soldiers Hill had still to be climbed but as they approached the frog stone the sun came out in a clear blue sky. 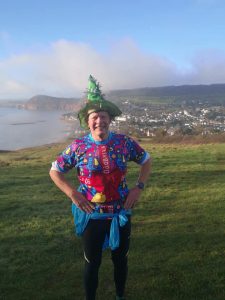 As part of the club’s tradition, the group lined up in formation at the top of the grass slope on Salcombe Hill, spread their arms and sang the Dambusters theme tune as they ran/slipped down. 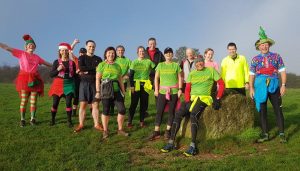 Boxing Day MGs at the Frogstone

Club runner Cheryl Boulton decided Boxing Day would be a good time to complete her Grand Western Canal virtual 10k before the end of the year cut off and had an enjoyable run with fellow MG Susan Reeves.

In Exmouth 443 clear headed runners lined up for the New Year’s Day park run and despite the rain two Sidmouth Running club members got new PB’s. Kirsteen Welch was 3rd overall with a new PB of 17:44 and Alexa Baker knocked 3 minutes off her PB finishing in 30.16. David King, Clive Gilbert and David Skinner were also spotted wearing the Mighty Green shirts.

There is still time to sign up for the Beginners and Back to Running courses which start on Wednesday. Running is a great way to keep fit, explore where you live and meet people. Sidmouth Running Club welcomes all abilities and ages and are very encouraging-come and see for yourself. Please contact 07734581782 or email sidmouthrunningclub@gmail.com