What a difference a ‘K’ makes

A coach to Beer, a 10k run back to St Johns School for a barbeque and swim might sound like the perfect way to wind up the Summer season for Sidmouth Running Club.

It was certainly a day to remember especially for the 17 runners who were using this run as their virtual 10k Grand Western Canal entry raising money for Clic Sargent.

Under the leadership of chairman Terry Bewes the Mighty Greens posed for a photo, set their watches and followed Terry who eventually realised we were on the wrong path-about turn! An omen of things to come! 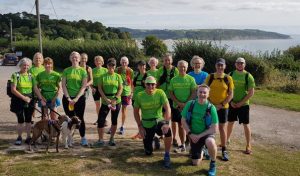 It wasn’t long before the group split enabling everyone to run at their own pace and enjoy the views. For the faster eight, this meant a coffee stop at Branscombe and slight concern that they hadn’t seen the other group approaching! They took the hilly route in their stride and arrived back in plenty of time to meet more club members for the barbeque.

Cath Miller, who had run a half marathon the day before which had been miss-measured at 14.8 miles long, started to doubt the length of the run when mile 6 saw everyone at Weston mouth. Relief that the required distance for the virtual 10k had been reached was overtaken by the realisation of how many miles were left to get back in time for the food.

There were a couple of ‘phone a friend’ calls and three runners were collected between the donkey Sanctuary and Salcombe Hill which left Ann Cole, Alexa Baker and Terry to run down Salcombe Hill and jeff up to St Johns School where they were greeted with a cheer having run an overall distance of 10 miles-the furthest Ann has run. The race medal and buff were certainly well earnt!

Terry is now a wooden spoon contender for miss-judging 10k for 10 miles but it made the virtual challenge one to remember and it was a great way to round off the Summer running season. Thanks were given to the school for use of their facilities, chef Matt and team for the food and Mighty Green Jenni Yeoman for not only running with a cold but being a life guard too.

Emma Grainger, meanwhile, (sensibly?) took part in the Teignbridge Trotters 10k race and completed the course in just under one hour 15 minutes, John Sharples ran his 100th parkrun at Seaton and Naomi Loosemore got a PB running 26 minutes in her first 5k race having started the year running 5k in 36 minutes. Great Mighty Green achievements. 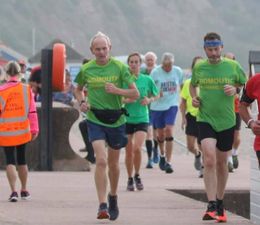 The club is looking forward to start its’ Winter programme which includes torch lit off road runs, interval runs, technical runs, on road runs and strength and conditioning classes. To find out more please visit the web site www.sidmouthrunningclub.co.uk