A sea of Mighty Greens at the Bradleys 10k Exmouth

As the sun burnt through the mist, 20 Sidmouth Running Club members gathered under the Mighty Green flag on Exmouth seafront on Sunday for a group photo ready to take on the Bradleys 10k race.

The chip timed, 2 lap race organised by Lizzie of LME events was sponsored by Bradleys Estate Agents who also got involved helping with registration, running in the race and marshalling. Sidmouth estate agent Stephen French and his wife Sarah were very encouraging marshals and certainly gave us all a boost as we passed them several times!

A special mention must go to Tracy Scannell who got a PB as it was her first timed 10k race. Tracy showed strength and determination as she started lap 2 and with some timely encouragement from Suzi Rockey who joined her for the last mile, ran over the finish line with chairman Terry Bewes hot on her heels. 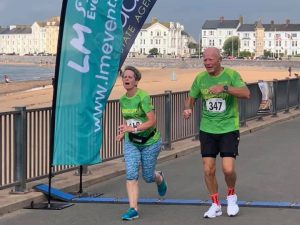 The team spirit of the club had been commented on by several runners (not SRC), who noticed how the club runners cheered each other on. As Beccy Johnson said, “The supportive waves, “well dones” and thumbs up really helped.”

Another example of the running club’s supportiveness was the success of the #runandtalk session last Wednesday. Mental Health champion, Charlotte Forrer, was delighted with the ‘fantastically sociable atmosphere’ and to everyone who stayed on after the run for a drink and a chat. 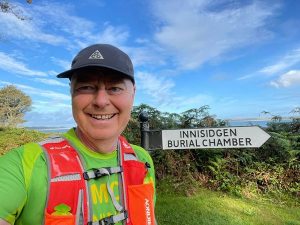 Derek Blackburn set out this year to run in events he hadn’t raced before so instead of lining up on Exmouth seafront he was on the Scilly Isles for a half marathon around St Marys. Derek enjoyed the scenic route and kept Terry’s advice to keep the sea on his left in mind completing the run in 2:42:00. Where will he pop up next?!

Sidmouth Running Club will be cheering on Mighty Greens Allan Kay, Yasmin Salter and Toby Garrick as they head off to London to take part in the Virgin London Marathon this Sunday. You’ve got this!