Gold In Them There Mountains For SRC’s Kirsteen Welch

Mighty Green Kirsteen Welch had the honour of representing England on Sunday swapping the coastal paths of Sidmouth for the mountains of Italy and she smashed it! Chosen by England Athletics to join the England team to run in the World Mountain Association Nations Cup, Kirsteen was delighted to come in 10th female place helping England to a team gold! 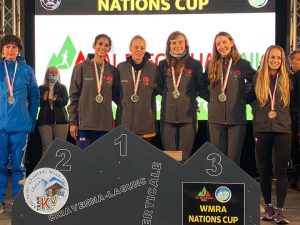 An elated Kirsteen said, “I loved this race so much, the hills were torture but the downhills were so much fun and super quick. 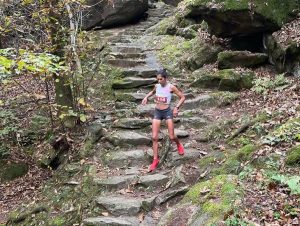 Every second of the trip has been enjoyable thanks to fellow team mates and the EA team support. I am going to build on this for the World Mountain Running Championships.” 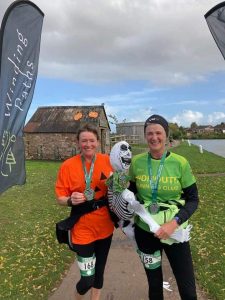 Closer to home Jo Earlam and Jane Hemsworth had a great day out at the Grand Canal Canter organised by Winding Paths entering into the Halloween spirit by carrying around ‘Bob’ the skeleton as he had ‘no body to run with’! The ladies completed the out and back twice route between Tiverton and Sampford Perverell along the Grand Western Canal just inside the 6 hour cut off time, making it Jo’s 84th marathon and Jane’s 31st! 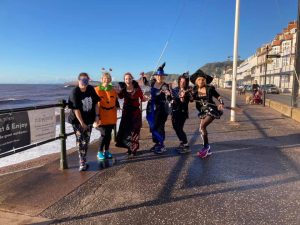 Scary Halloween on the seafront

An impromptu Halloween fun run was had by a group of Mighty Greens who don’t like to miss an occasion to dress up and run on Saturday morning. It was more fun than run as they kept getting stopped for photos! 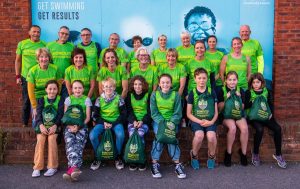 Twenty three SRC members swapped trainers for flippers on Saturday evening to represent the club in the Rotary Club of Sidmouth’s Swimathon. Chairman Terry Bewes said, “What a brilliant job all the teams did. The Elite Team swam 140 lengths, swam 108 lengths and the juniors swam 112 lengths. A special mention goes to the juniors who were outstanding in showing what a team sport is all about. For 55 minutes they swam, cheered and encouraged each other and in Blues restaurant afterwards were so well behaved a privilege to have them in the club.”