Sidmouth Running Club members Jo Earlam and David Knapman ran the Exeter Marathon on Sunday and at one point briefly ran together before David crossed the line and Jo had another lap to run. In fact David finished in second place in an unbelievable time of 2:35:27, just 8 seconds behind the winner! Not only has he smashed the club record by more than 5 minutes, the Mighty Green earned himself a championship start in the London Marathon. 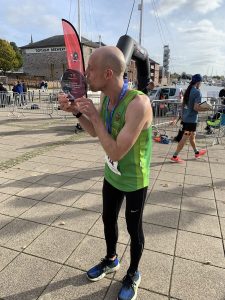 David after his great run

David has recently moved to Sidbury after spending the last couple of years in France where he rediscovered his love of running during the lockdowns. He was super happy to find that Sidmouth is home to a very active and welcoming running club. The Mighty Green said, “I’ve been training for Exeter Marathon for the past 10 weeks partly in France and latterly here in Devon with lots of back and forth along East Hill Strips interspersed with the Monday and Wednesday night club runs. We were lucky with the weather, 10c and lighter winds than forecast on Sunday and I managed to keep a steady pace throughout the two-lap course around Exeter Quay – a bit twisty and turn-y in places, but otherwise flat and fast. I am extremely pleased with my result and look forward to wearing my MG shirt in the London Marathon next year.”

For Jo this was her fifth marathon in four weeks, number 85 and she was delighted with her time of 5:18.00 as it was her best in 3 years and the last 20 marathons.