Sidmouth Running Club members were out in force on Saturday competing in the Otter Rail and River 10k event. The multi terrain race is organised by Tipton St John Playing Field Association and is gently undulating, following the valley of the River Otter and along the disused railway line in Harpford Woods using short road links, un-surfaced tracks/paths, fields with stiles, kissing gates and this year lots of MUD!

Luckily Sidmouth club runners have been advised by Chairman Terry Bewes not to dilly dally on the outside edges of the mud but to plough straight through and as Bex McDonald said, “It was great Grizzly training!”

There was an air of excitement as the Mighty Greens gathered for a group photo before the start; for many it was their first event in club colours and it was the first race in a long time that 45 MG’s lined up at the start. 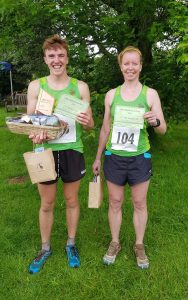 Mighty Green Toby Garrick had a fantastic run through the challenging conditions and came in 1st overall out of a field of 216 finishers in 36 minutes and was first in his age category. MG’s Antony Hall came in 9th place in 42:14 with Tom Knight not far behind in 42:57. Mighty Green Catherine Hilton had a great run, not only was she first local lady home but also first in her age category in 52:51.

Seconds behind Catherine was Charlotte Forrer who has recently successfully competed in her first triathlon, the Weymouth Middle Distance Triathlon organised by Bustinskin Events. Charlotte is also an England Athletic Run Together group leader with mums from Sidbury school; two of which ran the Otter Rail and River. 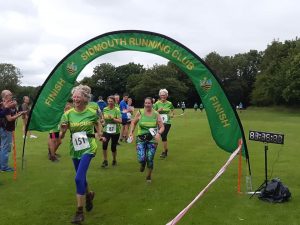 For the club runners further down the field it was very encouraging to hear the cheering as the finishers crossed the line and to see the number of Mighty Greens who had stayed on to do so in true club spirit.

Sidmouth Running Club would like to thank race director Gemma Wiltshire and her team for the very well organised event, the very friendly supportive marshals and the two cow marshals (they had skills!). There were smiles all round as the runners left with their finisher’s bottle of Otter Brewery bitter despite having very wet, muddy trainers.