The Warrior Chimps Conquer24 ultra-running race held at Powderham Castle on 5th & 6th June is an event where competitors complete as many laps as possible of a roughly 5-mile course within 24 hours. The race can be run solo or as a member of a relay team of up to 8 people, starting at midday on Saturday and finishing at midday on Sunday.

I’ve run 50km and 100km ultra-marathons before but nothing which involves running constantly for so long or through the night without sleep. I had a target of 100 miles in mind during my 15 weeks of training, which started in February. My race went pretty much to plan apart from being a bit too optimistic about how much food I would be able to stomach. I managed to clock up 60 miles (12 laps) by midnight using a 3 laps running/1 lap walking strategy which took the pressure off for the second half and allowed me to ease off considerably during the night and through Sunday morning. I hit a ‘wall’ at about 30 miles though, partly due to trying to eat too much early on and partly due to the daunting prospect of not being even a third of the way towards my target distance. Thankfully, the nausea passed after a couple of slower laps and allowed me to get a bit more food down, albeit significantly less than the 9000+ calories I burnt overall. 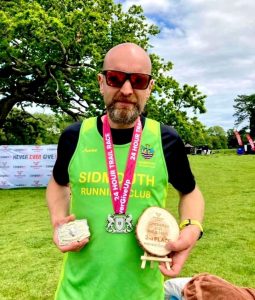 Ross with his medal

The course was fairly undulating with about 130m of ascent per lap. I found the 2-mile section through the woods in the first half of the lap the toughest as it contained most of the short, steep climbs and seemed much hotter, humid and void of oxygen than out in the breeze of the Powderham deer park. I’ve never run non-stop through the night before, but a misspent youth and a couple of cans of Red Bull and iced coffee very much helped in that respect. Temperatures didn’t drop much overnight so, apart from a couple of laps during the graveyard shift, I was running in just a t-shirt for most of the race. Luckily, the rain held off, save for a very slight bit of drizzle, otherwise the course conditions would’ve quickly deteriorated due to the constant army of feet gradually churning it up. The sky starting to lighten at about 3:30am, and the sun finally making a reappearance at about 5am on Sunday morning seemed to inject a new level of optimism into most of the runners still out on the course, myself included.

I had absolutely no idea that I was in the running for a podium place until I checked my phone during a quick food stop between laps and saw a string of text messages from family and friends watching the live tracker. It wasn’t until the last few laps, when a couple of guys ahead of me started to struggle, that the prospect of finishing 3rd overall looked doable. I managed to complete 21 laps (plus an extra mile with my eldest son Reuben) to reach a total of 104.8 miles, equivalent to 4 marathons, in a time of 23hrs 36mins 34secs, also beating my previous personal bests for 50km by about 8 minutes and 100km by over 3 hours. I finished second in the solo men’s category to a professional ultra-runner who clocked up an astounding 24 laps.

My feet are a mess with blood blisters under three of my toe-nails, a swollen left ankle and a comedic inability to negotiate stairs – a small price to pay for an achievement I’m very much proud of but doubt I will endure again any time soon, if ever. It was great to regularly see my younger brother Guy, fellow SRC runners Naomi Garrick, Jo Earlam and Jane Hemsworth out on the course and also to have my heavily-pregnant wife, Polly, our two boys, Pixel our cocker spaniel and a number of close friends supporting me throughout the weekend.