Midday on a hot and humid Saturday in the beautiful grounds of Powderham Castle saw five members of Sidmouth Running Club at the start line of an epic challenge and two of those were preparing to run for 24 hours! 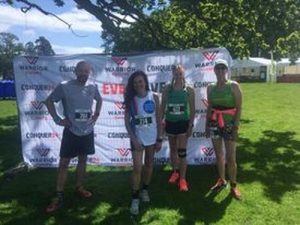 Suzi Rockey competed in the 5 mile (1 lap) category coming in 5th place in a field of 20 with a very respectable time of 45:34 minutes. 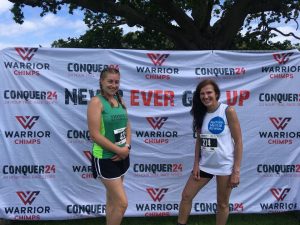 Jo Earlam completed her 78th marathon by opting to run 6 laps of the Conquer24 course, which actually made it an ultra-marathon. Jo was joined by fellow Mighty Green Jane Hemsworth for her final 4 laps. Jane had already participated in a sea swimming course in the morning and jokingly said she should have cycled to Powderham Castle to make it a triathlon! They both enjoyed the scenic if somewhat undulating (2,500ft of climb!) course. 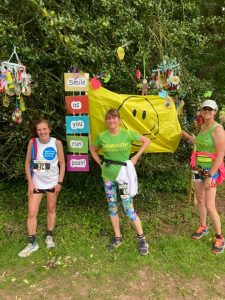 Duane Morris had set himself a target of running 50 miles, double the distance of his furthest run to date, and he achieved it running 10 laps in 21:18:51 hours. Duane said he learnt a lot during the run, it was a steep learning curve and he felt things he has never felt before but this did not stop him enjoying the experience and he is very glad he took on and completed the challenge. 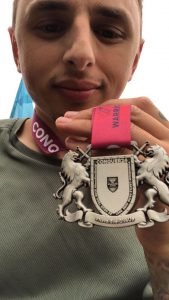 Not only was social secretary Naomi Garrick the top fundraiser of the event, raising £1,516 for Rethink Mental Illness, she was delighted to be the 6th lady out of 36 to complete the 24 hour challenge running an amazing 65 miles. Teacher Naomi had set up the smile tree her pupils had made for her along the route and she was still smiling right to the end despite the blisters! Fellow running club member Richard King joined Naomi at 4am to compete in the 10 mile dawn dash bringing with him fresh supplies of plasters and cake! Naomi said she met so many fantastic people and running through the woods at night was magical, a really amazing experience. 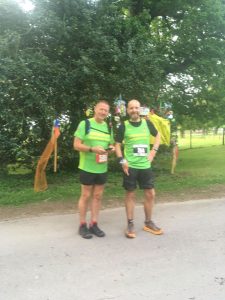 Ross Walton signed up for the solo Conquer24 race after closely following a Devon friend’s progress in the Tarawera 100 mile ultra in New Zealand in February. The MG had been training hard over the past 15 months, running a total of 550 miles including two 70 mile weeks! Ross had planned to run 60 miles between midday and midnight split into 3 x 20 miles, running 3 laps and walking 1 to take on food and drink then hobble/crawl the last 40 miles between midnight and midday on Sunday. The training and planning certainly paid off as Ross finished in 2nd place, running an incredible 100 miles in 22:09:00 hours and 4 x marathons in 23:37:00 hours. Ross is temporarily hanging up his trail shoes to become a dad for the third time much to the relief of his feet!