Sidmouth Running Club’s vice chair, Sarah Watkins, has completed the South West virtual coastal path challenge in just 16 weeks.
Mighty Green Sarah said, “Even though I had a year to complete the 630 mile challenge, lockdown allowed me to run/walk more and explore different routes around East Devon in the beautiful countryside.” 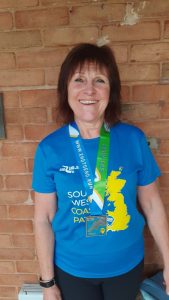 Sarah with her medal

Sarah’s longest walk was 33.5 miles and the most challenging was Seaton to Lyme Regis and back though most walks/runs averaged 8-10 miles. Sarah even incorporated the Grand Weston Canal virtual 10k run into the challenge and is the first MG to receive her 2021 medal.

SRC Web administrator, Rob Edwards, took on his Raced Coaching virtual challenge on January 1st following the success of him running Lands End to John O’Groats (LEJOG), a distance of 874 miles in six months which passed without incident last year.
Rob thought with a year to complete he would sign up to run there and back, a total distance of 1,748 miles. He worked out that he would need to run 33 to 34 miles a week or an average of 6.7 miles a day 5 times a week but found not being very quick he needed to run 6 times a week. Unfortunately in February 2021 a strong gusty wind and a slippery surface around Jacobs Ladder saw Rob trip over and bang his knee which resulted in 3 weeks of no running and 100 miles lost. But this Mighty Green is back and currently about 6 miles south of Perth (virtually) on the A9, having done 637 miles and almost back on schedule with only 237 miles to go before the end of June before he turns round and comes back again!
Rob likes to run from home over to Otterton Mill and back approx. 10 miles; is it the scenic route or the promise of a cappuccino and flapjack by the river Otter?
Rob’s wife Sue has questioned his ulterior motivation about LEJOG. Yesterday morning after coming back through the door from an Otterton Mill run this morning Sue asked Rob, “How was the run?” for him to reply, “Good, there were only 2 people ahead of me in the coffee queue!” The lengths some people will go to for a cup of coffee! 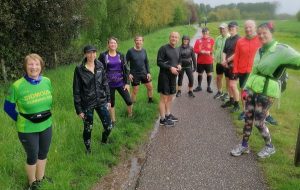 SRC committee member Jo Earlam was joined by a group of club members to run 2 sections of her ‘Exeter Cosy routes’ on a very wet Sunday as part of Dementia Action Week. Jo has mapped Exeter in a series of routes which add up to a 26.2 mile circle of the city to encourage those living with dementia to get out and about. Jo created the routes with Exeter Dementia Action Alliance as a tribute to her adventurous dad who loved mapping routes and walking with Jo and lived with diagnosed dementia for four years. Jo, with her husband John who lives with dementia was also featured on this week’s Songs Of Praise, sharing her inspiration behind the route and how she’s personally affected by dementia to presenter YolanDa Brown.

Jo would like to thank all the Mighty Greens who came on the run and weren’t deterred by the flooded fields as it was a great support for the project and Dementia Action Week. The rain certainly made it a memorable run, as Sarah Watkins said, “It was great fun to join Jo today, especially when 12 of us were knee deep wading through a water logged field!.” 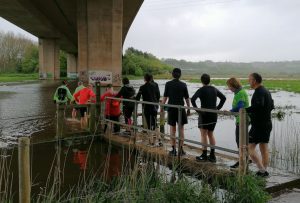 It really is this way