The sun shone on Exmouth seafront as the Mighty Green runners gathered for the start of LME’s The Clinic Maer 10k and half marathon race. A well organised event with an easy route to follow and really friendly marshalls. 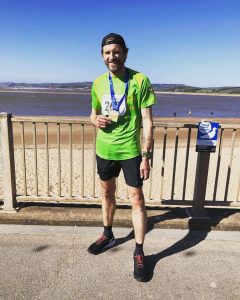 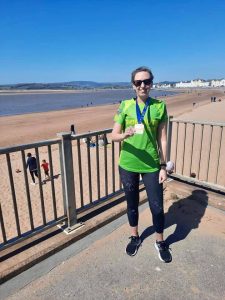 Yasmin, who enjoyed the perfect weather conditions, ran the route in 49:36 mins coming 4th in her age category and 8th female overall. Niall came in 8th overall and 1st in his age category with his PB of 41:18 mins despite feeling like he was going much slower than he actually was as he had figured out his splits wrong in his head and was pleasantly surprised at mile 5 when it dawned on him! 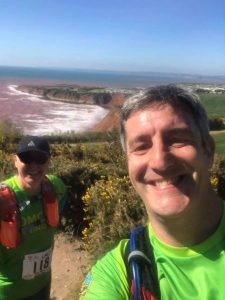 Four SRC members ran the multi terrain single lap half marathon course climbing nearly 1000 feet along the spectacular coast path; Derek Blackburn, Clive Gilbert and Graham ‘Rocker’ Shepperd ran the first 8k together before Rocker took off while Duane Morris completed the 13 mile course in 1:40:49, coming in 8th position overall and 5th in his age group. Rocker completed the half in 2:07:20, 44th overall and 7th in age category and not far behind Clive and Derek in 2:09:48, 47th/48th overall, 5th and 4th in their respective age groups. 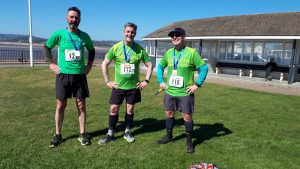 As Clive was running along Budleigh seafront he was approaching a couple of runners from the town who had just passed Derek and Rocker, as he pulled alongside them they said Sidmouth must be the friendliest running club in the world. Both Duane and Niall are new members of the running club and we are proud to see them (and all club members) wearing and representing the Mighty Green-hopefully they agree with those runner’s sentiment as you can’t say better than that!