After completing some long runs earlier in the year, a group of SRC members decided to take on Climb South West’s 5 Trig Challenge. A 21 mile, self navigated, off road run, taking in 5 trig points sitting in a loop around East Devon.
MG Cath Miller said, “After much conversation about whether we had enough food (yes!) Should we wear coats (no!) Had we enough paracetamol and ibuprofen for our various age related aches and pains, we set off for High Peak the first of the five trig points.”
They ran through beautiful East Devon taking in Aylesbeare Common, Woodbury, Black Hill and West Down Beacon trigs, finishing with a spectacular decent into Budleigh, along the seafront to the end where their much longed for medal was waiting for them! 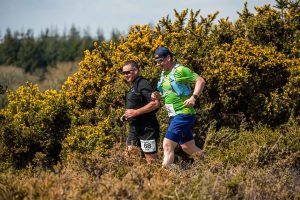 In a field of 54 runners, one of the six Mighty Greens who took part in the 5 trigs challenge, Allan Kay said, “It was a great day to be out running as a group from Sidmouth RC in an organised event.” They ran as a group right up to the last trig supporting and motivating each other. Richard King had even gone out and stashed water bottles around the route for them! 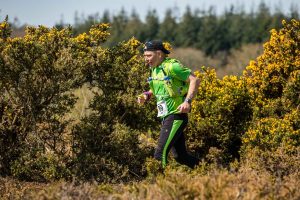 Allan, who ran the challenge last year with Adrian, found the anti-clockwise route was much better than last year’s clockwise route, the ups and downs gentler and finishing on a downhill along the SW coast path from Budleigh was special for him and Adrian ‘Gripper’ Horne as they used to play there as youngsters. 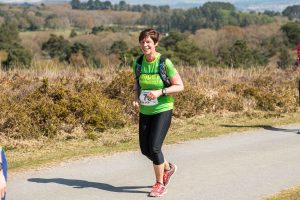 The Mighty Greens did the club proud, finishing together, half way in the field of finishers, and in Cath’s words; not bad for a bunch of oldies! 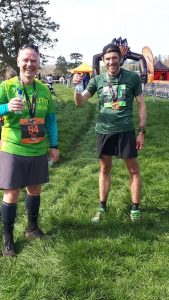 Beautiful scenery, happy conversations, local wildlife including a friendly adder were all part of a great day and the beginnings of normality again -all topped off with an icy cider on the beach, thanks Annie! 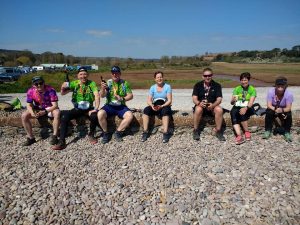 In other news the Juniors enjoyed their first session back with Tim Daffron on Sunday and Chairman Terry Bewes awarded the ‘Little Miss Chatterbox’ spot prize to Tash Morgan and Clare Pugh who managed to chat all the way around the 3.8 mile run on Woodbury Common last Monday.