Dates to go in the SRC Diary At last!

Following the Government’s roadmap for exiting lockdown restrictions, Guidance from England Athletics, updated 8th March and last week’s SRC committee meeting, club runs will be commencing in a Covid secure environment on Monday 29th March and the off road season begins on Monday 5th April. The club appreciates it is very much a live programme liable to change if the Government issues new restrictions and the EA further guidance after updates from DCMS and Sports England but is looking forward to seeing its members again.

The 3rd October is firmly in Toby Garrick’s calendar as he was the only member to meet the club’s criteria for the London Marathon place and will be representing the Club; we look forward to cheering him on and the other Mighty Greens who have a place in this prestigious event.

When MG Antony Hall ran the latest lockdown road run challenge, you do not want to read that he found it hard as you know there is no hope for the less experienced runner! In all fairness he did run from Sidford and back and completed 3 reps of pyramids of Convent Road with a recovery run down Bickwell Valley at the end of each set! David Welsh and Derek Blackburn also completed 3 reps, with Derek having the added incentive of Chairman Terry Bewes and fellow MG Helen Palmer cheering him on! Christine and Karen Farnham were surprised to see they had clocked up 8 miles, running the 3 reps in the rain while Kerry Salter ran 3 reps, aided (sensibly) by driving to the start. Carol McManus, Jane Hemsworth, Bert Dykema, Adrian Horne, Mark Norton, Jenny Kay, Alexa Baker, Caroline and Jon Ball took the 2 rep option!

The second road run challenge set by Terry involved a nice 5ish mile loop around the valley, for some-Ross Walton added mileage and ran at 7.14min/mile pace and Tim Swarbrick ran both of the road runs together, 8.43 miles at 8.53min/miles! Carol McManus is now enjoying her 6am runs in total daylight and early evening runners are managing to run the challenges mostly in daylight-the days are drawing out and what a difference it makes! As always the weather plays a big part and weekend runners including Liz Goodman and Alison Long found they had four seasons of weather in their run including hail. Mark Norton enjoyed the break from the hills and Tash Morgan finished the loop on a precise 6 miles. Also completing the challenge was Derek Blackburn, Bert Dyekema, David Welsh, Els Laureys, Beccy Johnson, Tracy Scannell, Jenny Kay, Alexa Baker, Caroline and Jon Ball, Christine and Karen Farnham. 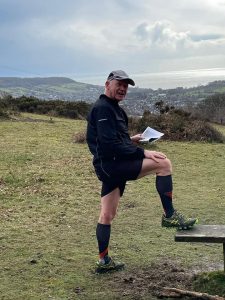 The off road challenge set this week was an OGLE on and around Fire Beacon, set by John Chesters which gave the Sidmouth based runners a chance to try out their orienteering skills. Christine Hellier set the bar high, running past all 20 control points in a very efficient route. Also visiting all 20 controls were the Dynamic Duo, Tim and Derek, although they failed to find the elusive blue bird. The big, blue bird comes out to congratulate those that run all the control points in numerical order as Ross Walton found out. 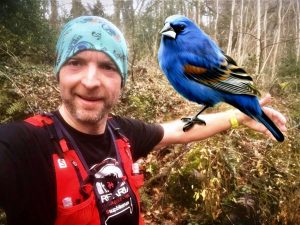 His numerical run of 15 miles with 2851 feet of elevation at 10.53 min/miles was celebrated with a rare sighting of the bird! 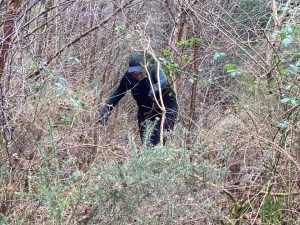 Although, the bird must have felt sorry for Jenny and Alexa (who are known to have difficulty following the easiest of instructions, never mind following an OS map with numbers on it) as it appeared in front of them just as the path they were on petered out. What followed was a lot of laughter as they scrambled up through brambles and trees trying to find somewhere they recognised! Amazingly they visited 10 control points. 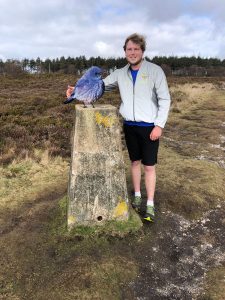 Sunday saw Mark Norton, Terry Bewes, Kyle Baker, Karen and Christine Farnham take on the challenge. Terry’s plan to follow Christine’s route didn’t quite pan out but they had great fun with a few steep climbs. 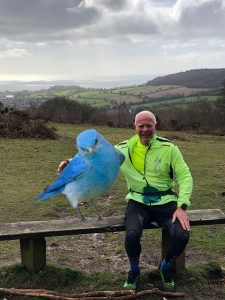 Terry took time to sit on a bench (control 4) with the big blue bird and Kyle found it perched on the trig point (control 3). 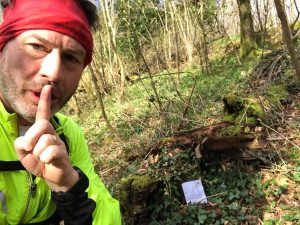 New MG Mark enjoyed meeting up with Terry and Kyle part way round and ran (socially distanced) with them for a while before discovering the blue bird nesting in the under growth. 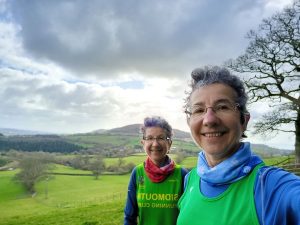 Christine and Karen, who did not encounter the bird but earned extra kudos for running from home and back, enjoyed the run except for the part where they were ankle deep in mud. We await John Chester’s scoring.