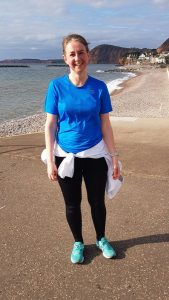 The participants of Terry’s lockdown challenges were deceived into thinking the ‘daffodil run’ sounded a lovely route to take you past the glorious displays of daffodils appearing all around Sidmouth. What it did involve was, as Bert Dykema said, a lot of hills-circuits of Boughmore Road, Convent Road, Cheese Lane and Cotmaton Road to Foxes Corner, all the way to the top of the grass above Jacobs Ladder, which is where the daffodils came into it! On top of that was a section of running on the pebbles which for Tim Swarbrick was reminiscent of Seaton parkrun but unfortunately for Cheryl Boulton meant she ended up with a very swollen ankle! 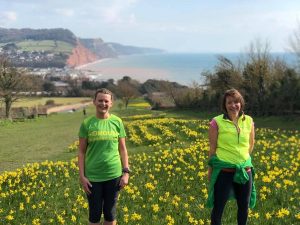 Running under the stars Mark Norton, Jenny Kay and Alexa Baker didn’t see the daffodils but ran two circuits (5 miles), one in each direction as instructed whereas Carol McManus was up bright and early on St David’s Day and enjoyed the host of golden daffodils. Newly appointed MG Rob Waggett ran one circuit and later in the week ran over 7k, his longest run yet. Taking advantage of the weekend sunshine and running two circuits were Jane Hemsworth, Yasmin Salter, Caroline and Jon Ball, Susan Reeve, Cheryl Boulton, Alison Long and Liz Goodman. Running three circuits David Welsh covered 8.09 miles and Graham ‘Rocker’ Sheppard 12.91km and accepting the gauntlet Terry threw down, Ross Walton ran an amazing four laps which including the distance to and from his house amounted to 15 miles with 1768 feet of elevation at 9.34 min/miles! 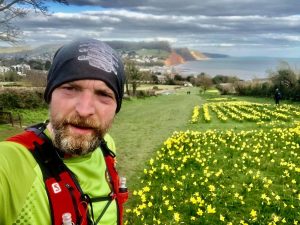 Ross with the daffodils

The Chairman’s second on road challenge involved self-navigation around local landmarks some of which needed a bit of local knowledge (or googling) to find, especially the old cinema site, where the convent was and the hanger. Ross Walton was the first MG to complete the route; he ran 6.28 miles at 7.40min/miles. Jenny Kay and Alexa Baker ‘ran’ into Mark Norton as they converged at the rugby club from different directions, Tash Morgan included a run up to the rugby ground at Sidford to cover herself, Ann Cole missed the Knapp, Beccy Johnson and Tracy Scannell enjoyed the challenge as did Kerry Salter who was pleased to fit a run in this week. 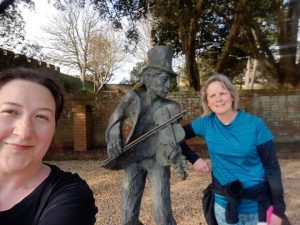 Carol McManus, David Welsh, Tim Swarbrick, Yasmin Salter, Christine and Karen Farnham also completed the challenge and know that the hangar is the wooded area below Beatlands Road and above the river! 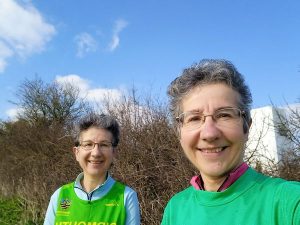 Leeann Thomson was back with a vengeance this week completing four challenges, Sam Ingram ran the first landmark challenge and the Primley figure of 8’s, Christie Ward and John Sharples ran the Bickwell Valley laps, Kate Jenkins and David Welsh both knocked off time on their unofficial SRC park run, Cheryl and Susan ran the lamppost challenge in 58.18 mins, Kyle Baker fitted in the Malden Road challenge, running 3 miles at 7.24 min/miles before the running club committee meeting started on zoom and Dan Pretttejohn ran a marathon in an impressive 4.29 hours taking in Ottery, Budleigh, the coast path, Sidford and East Hill strips! 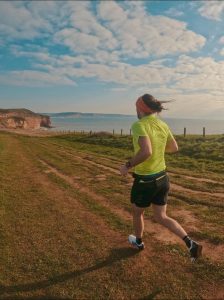 The Chairman’s off road challenge also involved the coast path, a visit to Weston trig and over 2,000ft of elevation. The dynamic duo, Tim Swarbrick and Derek Blackburn completed the run in under 2 hours, Stuart Coles in 3 hours and the clock stopped for Jenny Kay and Alexa Baker! Running on Sunday Christine and Karen Farnham enjoyed the whole route and Brigid McSmith and Ann Cole (coming back from injury) ran the first part.

John Chester’s challenging OGLE’s have seen Colin L’Anson run 15.8 miles and take in all 12 control points of OGLE 9, Kate Jenkins started OGLE 10 and Jo Earlam completed it running 6 miles, Hamish Spence and Tom Knight completed OGLE 4 and Emma Grainger revisited OGLE 7 and ran OGLE 10. Word is the Sidmouth based runners will find out what an OGLE involves next week!