To sign up and commit yourself to a beginner’s course in January can be daunting at the best of times, never mind during a restrictive lock down period, but this week saw three SRC beginners complete the course.

Starting with a bench mark run and following the training programme under the guidance of chairman Terry Bewes with support from the club members, the beginners built up their stamina and mileage over a five week period. 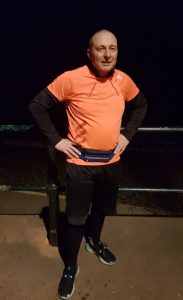 First to run the official 3 mile route nonstop with Terry was Rob Waggett on Thursday evening, who was very chuffed with his time. Tilly Austen and Kathy Jordan completed their official run on Friday and despite the rain celebrated with a takeaway slice of Devonshire apple cake with clotted cream! Congratulations to all three, hopefully it won’t be too long before we can all run together on club nights. 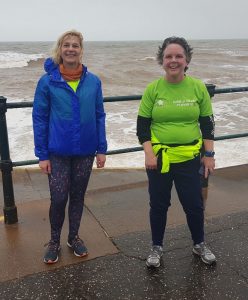 Further congratulations go to Mighty Green fire fighter Allan Kay, who not only completed his 32 days of 5ks Blue Light Challenge raising money for the Fire Fighters charity but has had confirmation of his place in the 2021 London Marathon on behalf of the Fire Fighters charity and to MG Derek Blackburn who, alongside running the weekly challenges, had set himself one too, raising money for Cancer Research by running 56 miles. 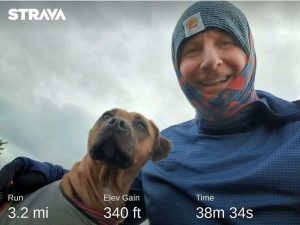 As always the weather plays a big part in the conditions underfoot, or in runner Jo Earlam’s case, under her bottom! On Wednesday, Jane Hemsworth, Jo and Freddie the dog set off on a 12 mile OGLE in the rain, as well as finding the control points they also encountered rivers where they wouldn’t normally be and very slippery, cold, wet mud on East Hill. As Jo said it gave her a soft landing! 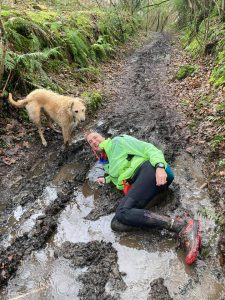 Clive Gilbert, Tom Knight, Emma Grainger and Hamish Spence also took on the OGLEs. Emma revisited OGLE 7 as she had previously taken a wrong turn and found two more control points although might wait for drier weather before venturing out again. Tom tackled more than one OGLE this week and got his family involved with one of them and found all 32 control points. John Chesters who sets these routes was very impressed especially as the conditions weren’t the easiest. Hamish took on OGLE 9, and dispite the mud ran his first half marathon distance of the year.

The on road challenges involved, (surprise, surprise) inclines but this did not put the running club members off! Carol McManus was out at 6am on Monday morning completing the Bickwell Valley reps, Niall Francis came back with a vengeance from injury adding an extra rep to the required 2 if you ran there, 3 if you drove, and ran 4 reps. Who knew that 3 reps from the Belmont Hotel to the top of Bickwell Valley and back was 5 miles! It certainly came as a surprise to some although it was nice to see other runners doing the route and being able to shout out encouragement to each other.

The second challenge was the old favourite, Brownlands lamppost pyramids. As Kerry Salter and Susan Reeve found out, you do need to concentrate on this run, it is very easy to get distracted and the last thing you feel like doing is running to the fourth lamppost unnecessarily! Getting the right road is also an advantage as Yasmin Salter found out, having done a great lamppost pyramid up and down Redwood Road! Lottie May incorporated the challenge into her longest run for a long time, of which she was rightly pleased with, multi-tasking mum Tash Morgan finished the run with a food shop at Co-Op and Alexa Baker wasn’t the only one to think the fourth lamppost kept moving further away!

Tim Swarbrick, Sam Ingram, Ross Walton, Stuart Coles, Kyle Baker and Terry Bewes incorporated two challenges into one run, be it this week or a previous week’s challenge, upping the mileage and Bert Dykema ran an amazing 18 miles on Monday! 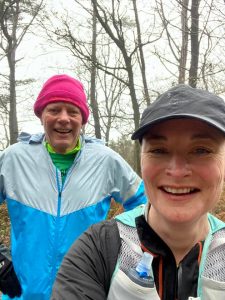 Terry Bewes had the company of Sarah Burston when setting this week’s off road run through Mincombe Woods. Ross Walton added a couple of photos for reference with Terry’s instructions when he ran the route in foggy conditions which helped the Dynamic Duo, Tim Swarbrick and Derek Blackburn complete the route perfectly later in the week. Christine Hellier ran a variation which she found very enjoyable and Christine and Karen Farnham completed the run in the dry on Sunday, enjoying the views but blaming Terry’s vague directions when they ran slightly off piste!