The Mighty Greens were presented with a Chairman’s Sunday Special: Valentine’s Day.  Seeing as how the last Chairman’s special involved running in the sea we were relieved it was MG Sarah Burston who came up with the idea of running a Strava/Garmin route in the shape of a heart or a design of your choosing associated with Valentine’s Day. With a male and female prize up for grabs Bex McDonald was the first to run and submit a perfect heart shape that had been devised by fellow MG Zsa Zsa Croft. Google maps proved very useful and similar heart routes were also run by Mark Norton, Yasmin Salter, Jenny Kay and Alexa Baker. 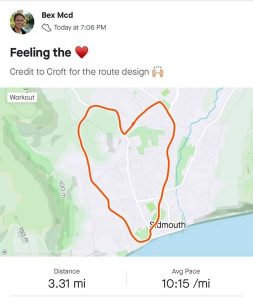 When Sidmouth Running Club chairman, Terry Bewes, set week 5’s off road challenge last weekend, he got distracted by the improved weather, beautiful countryside and muddy conditions underfoot. Even to his surprise he had run an impressive 11 miles, taking in Muttersmoor, Northmostown, Dotton, Colaton Raleigh, Otterton and joining the coastal path through Ladram Bay back to Sidmouth. Fortunately for the club runners there were three options to cut short the route.

Club secretary, Jo Earlam, picked a good day to run the whole route, adding in the climb to the top of High Peak trig to get a 360o view in the sunshine. With the weather turning colder the dynamic duo aka Derek Blackburn and Tim Swarbrick, found the mud Terry had encountered had frozen into ruts of ankle breakers but despite this completed the full run in under two hours. 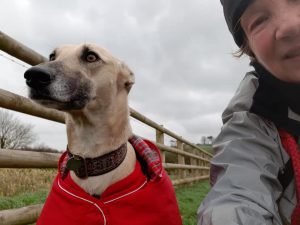 As the weekend approached so did the strong winds which added another dimension to the challenge. Christine Hellier and her niece, Louise Bond, kitted up appropriately and enjoyed a shortened version of the route as did Ann Cole with Ivey her dog who encountered very strong head winds at Ladram and Peak Hill, as well as flurries of snow. Adrian ‘Gripper’ Horne had an early start on Saturday, running the complete route with his son, Ollie Goodchild-Horne and even ventured up to High Peak trig. Helen Akay and Alexa Baker also decided on an earlier start thinking they might be out for hours and were pleasantly surprised to return in under three hours and having completed the whole route.

The precision challenge continues with Sam Ingram nailing it on his fourth attempt, Ross Walton ran a perfect 6 miles and Kyle Baker a spot on 4 miles. Lee-Ann Thomson, Derek Blackburn, Hamish Spence and Rocker Sheppard were close but not close enough for Terry!

This week Emma Grainger and her four legged companion took on an OGLE 7 in icy conditions and found 12 of the controls, as did Kate Jenkins but found the cold hampered her from checking the instructions so enjoyed the views instead, Tom Knight attempted the OGLE 8 course and had a slight navigation crisis in the middle while Jo Earlam ran 6.5 miles on the Aylesbeare Common OGLE finding all 20 check points. 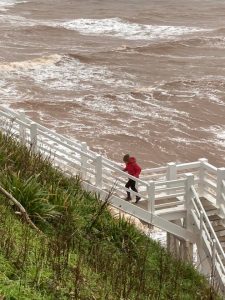 The beginners have really come into their own this week, despite the worsening weather conditions they have been out doing laps of Jacobs Ladder, with Tilly Austin and Katie Kirk doing 7 laps and Kathy Jordan 8 laps. Andrew Swain ran an impressive 2.89 miles with 11 minute miles on the beginners lamp post challenge in Bickwell Valley. With the running bug well and truly bitten Tilly Austin went on to run her first 5k on Friday in under 40 minutes and Katie Kirk ran her first 5k on Sunday in under 35 minutes. A big Mighty Green well done to all the beginners, it has been fantastic to follow their progress and gain confidence in their ability. 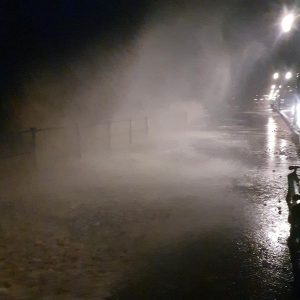 Antony Hall not put off by the weather

Special mentions must go to Antony Hall who chose one of the worst nights to run the seafront lamp post challenge, despite four soakings from the waves and being frozen to the core, he still completed the challenge running 6.23 miles in 48 minutes; Caroline Ball who cracked on with the challenges while her run buddy rested with injury; Yasmin Salter who celebrated receiving a place in the London Marathon ballot by running the week 5 Hillside challenge!

This challenge was a four and a half mile run to include loops around Salcombe Hill Road/Alma Lane/Laskeys Lane area. David Welsh wasn’t the only runner to think last week’s parking meter challenge was more preferable while Susan Reeve added to the challenge by running up Soldiers Hill first and Bert Dykema added on mileage by running from Sidbury! 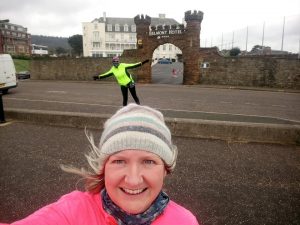 The second week 5 road run involved picture clues, land marks and self-navigation, a great way for our runners who have not lived in Sidmouth long to discover the delights of Sidmouth including the guide hut (Susan Reeve). For Mark Norton though, he might only recognise them in the dark! It was interesting to see the routes members took and how the mileage varied from Ross Walton’s 7 mile version to Liz Goodman and Alison Long’s 5 mile route and Tim Swarbrick’s mash up of both on road runs.