A month into Lockdown#3 and Sidmouth Running Club members are still rising to the challenges that Chairman Terry Bewes is creating.

Rising because one of the challenges involved a four mile run plus running up and down between the parking meters and beyond between Jacobs Ladder and Foxes Corner, over 500 feet of elevation gain in a short distance. This wasn’t the most popular of challenges!

The second challenge was all about precision, starting from your front door, run 4/5/6 miles with the object of returning to your front door on the mile. This proved more difficult than first thought, many were so close but not close enough for Terry who didn’t want to see on Strava lots of lines going up and down near your house to make up the mile! New SRC member Mark Norton blamed the bridge closure over the ford for being 0.05miles over! Cheryl Bolton and David Welsh showed their Mighty Green spirit when their first attempts failed, they ran it again, and again in David’s case. Congratulations to the few who managed it first time including Ann Cole, Jenny Kay, Alexa Baker, Paula Farrand and Bert Dykema.

Kate Jenkins, Hamish Spence and Bex McDonald and family were out enjoying the challenging OGLEs and discovering routes they hadn’t run before and Karen and Christine Farnham were catching up with last week’s off road run, starting from home and clocking up an impressive 11.3 miles. Club coach, Kyle Baker took on the lamp post challenge on the seafront with a different approach to it by running the furthest distance first. He also went by buildings rather than counting the lamp posts which can become very confusing and easy to forget after a while!

The SRC 5k parkrun route has proved popular and a special mention must go to Antony Hall who ran it in a very impressive 19.5 minutes, and average pace of 6.21 min/miles.

Another special mention must go to Mighty Green Cheryl Boulton, who challenged herself to run a virtual half marathon. Since lockdown#2 Cheryl has been building up her mileage and on Sunday successfully ran 13.12 miles. She is looking forward to receiving her medal from the running bible.

A big thank you and well done to Mighty Green Jo Earlam who having noticed a lot of litter on last week’s off road run by the A3052 Harpford Woods/Back Lane, returned with Denise Bickley of Sidmouth Plastic Warriors and collected two huge, heavy bags of litter in an hour.

This week’s off road challenge was very fitting as this weekend would usually see the Four Trigs fundraising event for CRY (Cardiac Risk in the Young) in memory of Jonathan Hayman.

The chairman’s challenge was to run two Trigs, Buckton and Fire Beacon, following very clear instructions. Fitting in these challenges can be difficult so not everyone could fit two Trigs in and one is better than none, that’s how keen Christine Hellier, Kerry Salter, Karen and Christine Farnham were when they ran to the Fire Beacon Trig.

The dynamic duo, Tim Swarbrick and Derek Blackburn, ran midweek and took in Weston trig too, as did Sarah Burston. Tim and Derek met Jo Earlam and Jane Hemsworth en-route who were doing the 2 Trig challenge. Respect to Jo who ran the route again later on in the week with Leeann Thomson, who, it’s hard to believe, was in the beginners group a year ago. 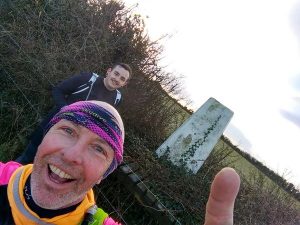 The weekend saw an early start for Adrian Horne and his son Ollie, who ran from the seafront at sun rise along the cliffs to Weston Trig before heading inland to Buckton Trig where they saw Jenny Kay and Alexa Baker confidently making their way across the valley. The mileage of this off road run made Beccy Johnson and Tracy Scannell a bit hesitant but this did not deter them from completing the challenge which they proudly did. 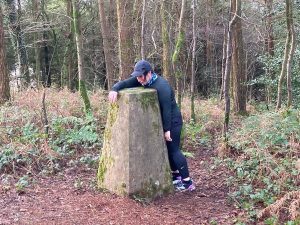 Rocker Sheppard was out on Sunday enjoying the views and snowdrops clocking in two Trigs as were Brigid McSmith and Ann Cole plus Ivey the dog. They had a great run full of mud and laughter and thought Terry’s instructions had improved! 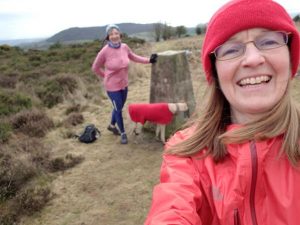 Mighty Greens Helen and David Palmer ran 16 miles taking on three Trigs with 2,492 feet of elevation and Ross Walton found that despite a few stretches of mud it wasn’t too bad under foot when he ran four Trigs, Buckton, East Hill, Fire Beacon and High Peak in 2 hours 36 minutes.

Members of Sidmouth Running Club are very supportive and encouraging and this is why runners of all abilities are taking on the challenges and stretching themselves. It might be tough at times but we look forward to week 5 where a ‘Valentine Chairman’s Special’ might be on the cards!