As 2020 drew to a close, two members of Sidmouth running club had cause to celebrate their mammoth undertakings.
John Sharples ran his 1,000 mile of the year, although the icy conditions made it a challenging one. Daughter and fellow SRC member, Christie Ward accompanied John on his final run of the year and said in places it was more skate than run! 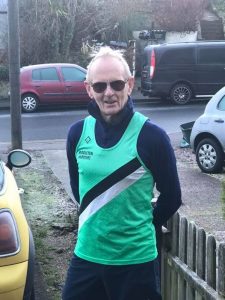 John wore his original club vest from when he lived in Manchester as he wanted to remember his best friend and running pal who is no longer with us. Chairman Terry Bewes commented that is an achievement not accomplished by many.
Rob Edwards set off on the 1st July to complete the 874 miles from Lands End to John O’Groats by the end of the year. Before the start of Wednesday 30th December’s club run Rob Edwards was presented with a well-deserved bottle of Prosecco and 3.5 miles into the club run, a big round of applause marked the end of his challenge. 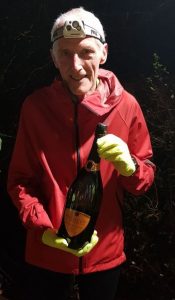 Committee member and web editor Rob, is already planning his next challenge, up and back!