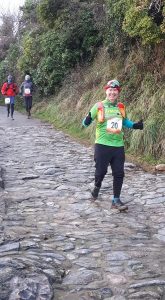 Derek Blackburn competed in The Mothecombe Beat The Sunset Race on 20th December, which saw him crossing the River Erme twice during the 14k route, while David Welsh has been running the Advent Calendar 5k series. Not long to go now David!