When Kirsty Cunningham, the store manager at Sidmouth Co-Op, put out a FB request on the Sidmouth Community page last Sunday looking for recommendations of individuals / organisations that have gone the extra mile for the community this year, members of Sidmouth Running Club had someone in mind straightaway!
Terry Bewes has maintained a sense of community in the running club throughout the year despite two lock downs and ever changing guidelines.
He would be the first to say he hasn’t done it by himself and that he has a supportive committee and team of run leaders who willingly give up their time to the club but he has gone above and beyond. 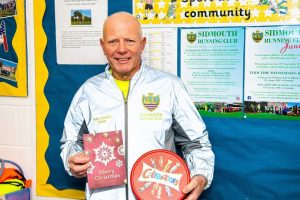 Terry with his award

Terry organised a weekly quiz on zoom, with the help of John and Caroline Ball and he put together a back to running programme for those that lost motivation during the first lock down. This created a sense of camaraderie between the runners as they shared their runs on the running clubs FB page.
He adapted the group sizes and start locations in response to the Government and EA guidelines keeping members updated and created two challenges during the second lock down, which again created a lot of banter and friendly competitiveness but also a lot of admin on his behalf keeping track of everyone’s records.
Terry is currently hand delivering trophies and prizes individually and compiling a video presentation, again giving the club members a sense of community lost by not being able to sit down and celebrate achievements together.
The Mighty Greens are very grateful to Kirsty and Sidmouth Co-Op for letting them show Terry how appreciative they are of all he has done for the club and them.