The committee of Sidmouth Running Club are a determined bunch. Their AGM was due in March with the first lock down looming, so they held it in the open air at Manor Road car park. Secretary Jo Earlam did a great job taking the minutes in strange circumstances.

However, trophy night proved harder to arrange due to Covid restrictions on group club activities and despite a few attempts they were foiled at every occasion until chairman Terry Bewes and head coach Kyle Baker came up with a plan.

For the first time in the club’s history Terry will be presenting the trophies individually with Kyle taking a photo which will inserted into a video presentation narrated by Terry and compiled by Kyle Baker Videography.The video will be available for all members to view. 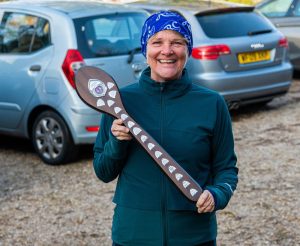 Two awards have been presented so far, Amelia Frankpitt won the wooden spoon for turning up to run the Ottery 10km one week early, only later to discover that she had also entered the Beer Blazer the following week as well. 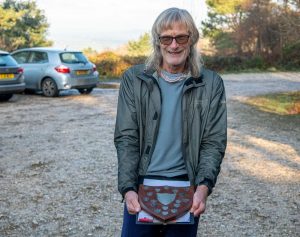 John Chesters won the Chairs Award for all the time he puts into organizing and leading the weekly off road runs throughout the year, sometimes three a week. Such is his knowledge of the tracks and trails around our AONB that we never run the same route twice.

Photos by Kyle Baker Photography of Amelia Frankpitt with the wooden spoon and John Chesters with the Chairman’s Award.