As well as setting the lock down challenges, Sidmouth Running Club chairman Terry Bewes has been completing them himself using them as training towards the Exe Estuary Virtual Half Marathon which he ran last week. When Terry entered the race back in March he had to enter his expected finish time, which as he had been training for it back then put 2:30:00. In reality it wasn’t until the start of the lock down #2 challenges that saw him start training with a six mile run. Using the challenges he planned the flat(ish), circular route which he would run two loops of, this included Harcombe, the Byes, seafront and Bickwell Valley. 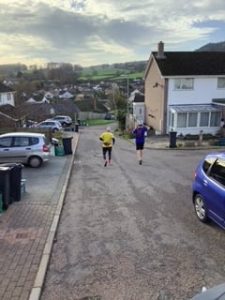 With grandson and fellow Mighty Green Kyle Baker joining Terry on the day for the craic they completed the half marathon in 2:37:00, a result they were very happy with; Kyle because he had not been training and had ran an extra 2.5 miles to get to the start and back and Terry because he received another medal for his growing collection. 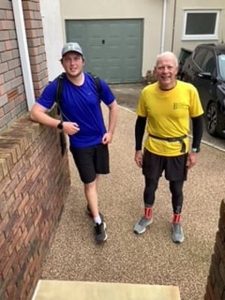 Terry has an eye for the running bling and has set the next Mighty Green challenge which is as a club to get as many members to enter the Virtual Grand Western Canal 10k Walk and Run for CLIC Sargent and win the team prize. There is a smashing bit of bling for all who complete the run in December so it should be a win/win challenge.