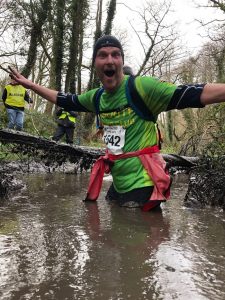 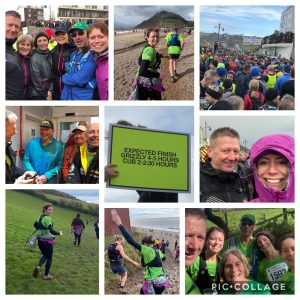 GRIZZLY CUB
A very fast young Toby de Gruchy took the 1st place in the Grizzly Cub, completing the route in a very speedy 1h07m57s. This means that SRC retains this crown for the second year running. Then in 5th place was Ben Chesters with a fabulous time of 1h13m10s and not far behind Ben was Tim Dafforn. Tim felt he’d had a very good race, renaming himself as Mr Consistent for improving his three seconds faster than last year’s time. He tried very hard to keep up with Ben Chesters, but lost sight of him on the cliff path to Branscombe. Tim had a quick ‘comical’ fall near the beach and tried to save a bit back for his return trip to the finish line. He took 10th place in a time of 1h18m19s.
Greg Ward did very well coming 75th in 1h35m30s and Sue Coleman who was aiming for a sub 2 hour time, was thrilled that her impersonation of a penguin sliding down to Branscombe beach didn’t stop her quest. She arrived back in 1h45m11s. Kathrine Hall did herself proud by knocking around two and a half minutes from last years time. An extremely muddy Kat arrived back on the line in 1h47m and was immediately hosed down by the fire brigade. Really enjoying himself and showing it, was John Sharples who was 184th and took 1h51m41s. Next in were Derek Blackburn in 1h57m, Paula Farrand 2h01m36s, Sam and Nick Dicks who ran together and both arrived back in 2h01m43s. Bert Dykema did very well in his longest race for a few years arriving back in 2h11m.
Suzi Rockey, Catherine Cruise, Sarah Burston and Terry Bewes ran as a group. Suzi who was recovering from an injury hit the pain barrier near the end, but came through with a 2h19m47 time with Catherine at 2h19m48 and Sarah Burston 2h19m54s. Terry who has done 10 full Grizzlies over the years and was glad to do the Cub managed a time of 2h19m55s. This was Julia Haddrell’s first Grizzly Cub and she found out what an energy sapping start on pebbles was like! However, not to be deterred she kept her spirits high and enjoyed the fabulous views when on the tops of the hills and grabbed a time of 2h33m46s. There were a total of 587 competitors.

Official photos can be found and purchased here: