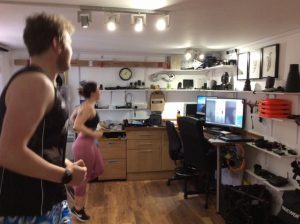 The Sidmouth Running Club successfully held its’ AGM on the 19th of March. It was held as an outdoors meeting and in the unusual but original venue of the Manor Road car park. Why did ChairmanTerry Bewes think that the long stay carpark would be necessary? We do not generally take very long do we? Anyway, a record breaking 3 minutes was all it took to get the AGM done and everyone in attendance managed a 2 meter social gap. Terry thanked everyone who attended the make-shift meeting announcing a record year for membership numbers. More Mighty Greens are entering races and the Junior section was now up and running with Kerry Boyle and Claire Ashby heading it up. He thanked the Committee for all their time and efforts over the year, along with the brilliant coaches and leaders. He also acknowledged the club membership as a whole who all make our club such a joy to lead. He finished off by stating,“We will be back after the current storm has passed, and back with a bang”.
With the current circumstances under the shadow of Corvid19 it was decided over the last week, that formal club nights would have to cease. Then, over the course of this weekend, with ever changing situations, another tough decision was also made. It is with regret that it would be irresponsible to start the informal runs on a Monday and Wednesday evenings from Port Royal, so until further notice the club will not be organising any formal or informal meet-ups, this is within the guidelines of the ever changing situation.
For myself and many others across the whole world, running has been the route to get back fitness levels, both physically and mentally. Running with a club has enabled me and helped with self confidence and self belief. I’ve made good friends, enjoyed long chats while not noticing how many miles are being covered, so the club nights will be sorely missed. However, seeing what’s occurring around the planet right now is very scary. I have to say this virus shocked me! So I’ve decided to hold off from running for now! But only for now. All things being equal, I will be back building up my distances again and in the not too far off future. In the mean time, I know there is plenty of exercise that can be done from inside your own home or in your back garden. There is so much out there, particularly now with the internet, YouTube is brimming with fitness training footage, ideas and encouragement. A great example of this was Kyle Baker and Nikita Kay who joined in online with LC Fitness to help keep their fitness levels up. This was a free, 20 minute session last Saturday morning, which coincidently started at the same time as Parkrun would have got going in normal circumstances.