Beating Those Exe to Axe Covid Blues (Part Three)
Sunday the 5th of April 2020 and many Mighty Greens were to take part in the JP’s Exe to Axe race along the Jurassic Coastal Path from the RLNI station at Exmouth, to the Promenade of Seaton. However, the dreaded Covid Virus put an abrupt end to that writes Hamish Spence!
Fortunately, as a population we are still allowed (at the time of writing this), to take a daily breath of fresh air and have some exercise in and around our own local areas, as long as we abide by the social distancing rules. ** (fullfact . org states… You can leave the house to exercise once a day. The government has said you should use open spaces near to your home where possible, and advised against unnecessary travel for exercise (such as driving to a national park or beauty spot).
This weekend (4th and 5th of April) was no different, with many Mighty Green Sidmouth Running Club members doing exactly that and they have clocked up some good mileage. So I thought I should put together a collage of an alternative version of the Exe to Axe event. None of the participants knew they would be taking part in any form of competition and therefore the rules of the “Race” were retrospectively as follows.
Firstly. All Social Distancing rules were observed at all times.
2nd. Well behaved dogs were welcome.
3rd. No headphones were used.
4th. There was no minimum or maximum distance to cover.
5th. Participants could take part at any point of the weekend.
6th. This comes under the currant daily exercise allowance.
Christie and Greg Ward have been ticking over on 2 or 3 runs week, so come the weekend it was inevitable that they would take off for a jaunt. They got off to a very tough start though, by heading up Milltown Lane and Salcombe Hill with the aim of re-creating the Woodland Relay. That didn’t go to plan as they both managed to miss a turning. Something else they really missed, was the fabulous cakes at the end. Both ran at a steady pace covering around 4.5 miles whereas their Whippet who joined them, went like a rocket for the duration doing approximately 22.2 miles.
While no one was watching Danny Painter did some Strava graffiti art with a tribute to the NHS on his daily run, he also worryingly clocked 6.66 miles, how Devilish! He had an average pace of 9:02 min/miles and climbed 709ft of elevation grain.
My running buddy for the real Exe to Axe race was Adrian Horne. He took a little outing yesterday on his own, but was really missing the club runs with all the camaraderie that goes with it. His Exe to Axe was a circuit around the very picturesque Sid Valley Ring. 14miles in 2h48m. I took myself (Hamish Spence) and my Dog (The Spanner) to complete a job in a customers garden. After which we both ran circuits around the garden. I have no idea how many times we ran around that garden as dizziness had set in halfway around, but I clocked up 2.8 miles and The Spanner I’m guessing about 4.5 miles. There were no jelly babies, the route was not Marshalled and we didn’t see any fellow runners. However, it was such a beautiful afternoon with wall to wall sunshine. The birds were singing for Queen and Country, bumble bees and butterflies were out in force and there was some rather sweet smelling blossom.
Jo Earlam, like many, many people right now, is finding it hard to keep motivated to run. Missing the company or the goal of an event to look forward to. She, like others is finding mental energy is at full stretch! However, she has decided in the meantime to start using her walking poles and stride it out. Doing an average of 15 min/miles even off road and uphill.
Also walking was a chilled Nick Jennings, except for one spurt of speed up Filcombe Hill where he achieved a personal best time. Out for 2h09m completing 4.6 miles with a very relaxed over-all pace of 28:06min/miles.
John Chesters made the most of the sunny day with a 7+ mile round trip from Ottery to Tipton via Knightstone and Lancercombe and back along the river. His only company a Kingfisher and some ducks. Time keeping was good with 1h36 on the clock. 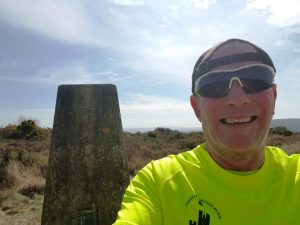 Terry Bewes chilling out at the Fire Beacon Trig point

Terry Bewes chose Sunday to participate. He opted for running up onto two of the Sidmouth trigs on his route, Buckton Trig and Fire Beacon Trig. He set off from Stowford Rise and along the main road to Sidford, passing the Blue Ball Inn where he turned into Harcombe Lane to Snodbrook Cross. Then followed the lane passing Boswell Farm up to Knowle House and on into Harcombe. From there he followed the path up the field into Buckton Wood and up to Buckton Trig Point. Carrying on across the top of the hill he then followed the East Devon Way down into Sidbury to make the steady climb up through fields and lanes to White Cross. He continued on the East Devon Way along the top and through the woods were possible onto the Fire Beacon Hill Trig Point. He then dropped down through Harpford Common and Woods to Stowford Cross. It was then back home. With an elevation gain of 1375 feet, he completed his 9 mile run in 2h02m. He said “I really enjoyed running on my own as I had no rush on me. I could take time out to not only enjoy the fantastic views but to sit, close my eyes and listen to what was going on around me, something you cannot do running in a group. It was a great experience and I would recommend it the next time you run on your own or with a likeminded friend”. Terry almost bumped into Ben Chesters at the bottom of Greenway lane on his way home after a 10km run up and over Mutters Moor out to the Coastal Path. Ben had a bit of a surprise while going slightly off-piste and following animal tracks. He passed a naturist taking full advantage of the sun. 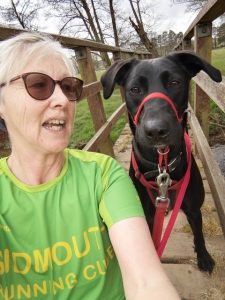 Emma Grainger took her faithful hound Luna for a cannie-cross session from Ottery to Escot and back. Amazing how fast Emma runs when attached to her dog, who was training who? Derek Blackburn did his usual round trip route, but in reverse just to shake things up a bit. He made great time covering the 6.9 miles in 1h06m. Back from injury was Cathy Miller, who sprinted at an average pace of 9:08min/miles on a 3.5 mile route down the Byes, along the seafront, zig-zagging her way back home all in 31m38s. Sue Coleman started and finishing at the Ottery River bridge. She followed the River Otter down to Tipton and then headed back along the road passing Fluxton and Salston. She took 56m16s to run the 5.8 mile route.

Well done to all who managed to take their daily dose of exercise, the results are as follows. In 1st place was The Ward Whippet for outstanding pace. 2nd was Danny Painter for his Strava art and joint 3rd, Ben Chesters and Terry Bewes for their quick thinking collision prevention skills. The Spanner and Luna share the wooden spoon. Luna for being patient and running while still attached to Emma and The Spanner for getting distracted when losing her ball.