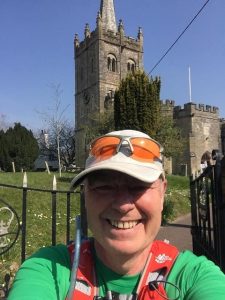 Derek Blackburn taking a breather and enjoying the sunshine outside the Sidbury Church half way around on his once-a-day daily run.

So, it’s been another week of keeping the Mighty Green fitness levels up, observing social distancing and keeping the Corvid Blues at bay writes Hamish Spence.
Before Corvid came along I had set myself a realistic target of running 1000 miles over the whole year and more if possible. I happened to mention this to fellow SRC member and Alphabet Parkrun addict David Skinner. Now he too is taking up this 1000+ mile challenge. David recently completed his 150th Parkrun and is now having Parkrun withdrawal syndrome! Parkrun is for obvious reasons canceled until further notice, but David is making use of his daily, one outside exercise period allowance, to run around the lanes of Newton Poppleford where he lives. Unlike myself he is using metric distances and so his target is actually 1609km over the year. Like me he started on January 1st and has so far have covered 397.7km. (He needs to average 31km a week). He admits to wanting to give it a miss on some days, however his wife sends him off out, reminding him that it is also good for his mental health and that he’d regret not keeping on schedule. David fully blames me for his decision to take on this challenge and I’m very chuffed to be blamed. Glad to be of service David. Are any other SRC members picking up this 1000+ mile gauntlet?
The Baker household has set up their own fitness studio. Kyle Baker’s Photography Studio is now The Baker Keep-fit Space. Kyle has set up some weights and follows Joe Wicks on YouTube. The family all follow LC Fitness and JM Dance. Alexa does a bit of Zumba and Fitsteps. All are managing a daily run at some point during the day.
Karen Farnham took herself off for an early Sunday morning 9 mile run up Buckton Hill and along the East Devon Way. Then on through Sidbury to East Hill Strips and onto Fire Beacon. She made a quick visit to the trig point and admired the view, before descending back down into Sidmouth. She was accompanied by her running buddy. Having not seen her running buddy for quite sometime (about 6 months), it was good to have her Shadow back. Shadow runs at exactly the same pace and really doesn’t mind where Karen goes. Shadow doesn’t talk and never complains about the hills. However, Shadow does need to understand a bit more about the 2 meter social distancing rule!
Paul Mitchel tries hard to find reasons not to do too much DIY every day while we are on this lock-down and one of the best reasons was found online. A great workout via Face Book led by Honiton runner Paula Ferris. There is a link to her web page which has sample stretch exercises. It’s then off for a daily single run, rounded off with a session of hill reps…he has to do this really as he lives at the top of a hill.