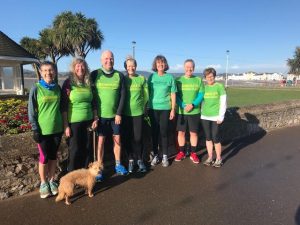 With this year being a leap year, the 29th of February was coincidently a Saturday. Nobody has run a Parkrun on a Saturday the 29th of February before, as the last time was back in 1992, long before Parkrun began. The next time it will be possible to do this will be on Sat 29th Feb 2048, so put that date in your diary… just under 28 years to go writes Hamish Spence.
Shaun Tipton headed up north to take part in the picturesque Parkrun in Worsley, Manchester. There was a great atmosphere with some rain, a bit of sunshine, woodlands and one stream, all on a flattish route. Shaun particularly enjoyed the cheerful high-fiving Marshall’s. At Henstridge Airfield Arthur and Christine Vince managed a 45m41s and 48m38s timing respectively and traveling even further afield, to the other side of the globe in Queenstown Park Run, New Zealand was Karen Farnham and David Millen. A pleasant route alongside Lake Wakatipu and through woodlands and gardens. It including three hills and felt very slow, However both managed to get around in under 30 minutes. Nearer to home David H Welsh, David Skinner, Christie Ward, John Sharples Sarah Powell and  Beccy Johnson all leapt into action at a blustery stoney Seaton. Julia Haddrell was joined by eight other MG’s at Exmouth, they had almost every weather type thrown at them, wind, rain, hail, a beautiful rainbow and then finally the sun came out! Sarah clapham was the first back in a respectable 25m54s, Derek Blackburn 26m17s, Paula Farrand 26m50s, Al Colwill 27m02s, Bert Dykema 28m52s, Julia Haddrell 32m06s, Jane Stein 32m44s, Lesley Miszewska 32m59s, Joanne May 49m37s.