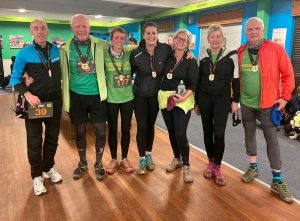 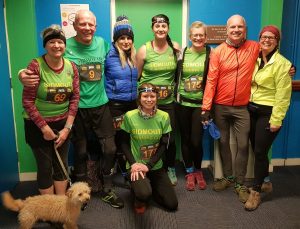 With Storm Ciara moving in on the darkened horizon, the Battle of Woodbury Common 10k and half marathon got underway writes Hamish Spence.
Organisers Something Wild Events, after careful consideration decided that Storm Ciara was far enough away from the Pebblebed Heathland of Woodbury Common, an AONB in Devon… The Battle Of Woodbury Common could go ahead as planned. So, along with121 other competitors, the nine intrepid Mighty Greens (Julia Hadrell, Terry Bewes, Emma Vine, Laura Broughton, Paula Farrand, Bert Dykema, Samantha Dicks, Becky McDonald and Tim Daffron) gathered together and got prepared, putting on their windy, wet-weather gear, adjusting and checking head torches in readiness to take on the battle ahead! (This time Laura remembered to charge her torch sufficiently after her last wild night event ended prematurely with a dead head-torch!)
The route followed the helm of Uphams Plantation and Crook Plantation after exiting Bicton College along the back entrance and onto the lanes. It then skirts Castle Plantation and the half marathon adds on a section through Colaton Raleigh Common towards Hawkerland, similar to the Bicton Blister.
T 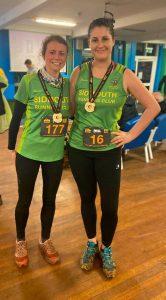 he first 4 miles felt like a very long uphill slog and there was a lot of muddy areas.  Then when reaching the top around Woodbury Fort, the wind really hit 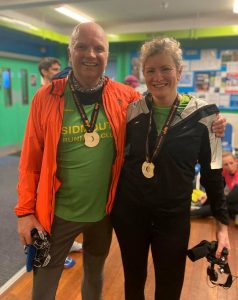 the competitors. It was like hitting a brick wall, one step forward and then two steps back!  Fortunately as the path turned, this massive blast of wind started to come in from the side, and then eventually the last mile took the runners downhill and onto a road surface back to the finish. A great, but tough race made more difficult and interesting by the wind speeds and many of the direction arrow signs had blown in the wind, meaning self navigation had to come into play a couple of times. Luckily with the head torches worn by leading runners, the way ahead was lit. Was this the reason the 10k route turned out to be nearer a 12k?
There were some fantastic results for the club, with Tim Daffron doing really well, booking his place as the first MG to finish his battle with the elements in the 12k. He crossed the finish line in 7th place in 50m55s. Becky McDonald had a great race and had pushed herself hard. She stormed her way around the course and arrived back home in a whopping 17 minutes faster than last year’s time, 27th place over-all in 1h01m56s. She was very happy to be the 4th lady back and 1st in her age category. Next to be blown over the line was Laura Broughton, who flew in and also took a personal best time for this event, shaving off 8 minutes to cross the line in 1h08m56s in 40th place.Terry Bewes breezed back in at superb time of 1h16m07s to be 60th over-all. He too, finished three minutes faster than the previous year and gained 2nd in age category (fairly young age category). Paula Farrand blew in at 1h23m06s 68th, with Bert Dykema shortly following just12 seconds later. Julia Haddrell found her second wind just before the finish and managed a sprint over the line to take the 73rd position in a time of 1h2911s. Emma Vine fought her way through the howler finishing with a 40th place in the half marathon and great time of 2h20m44s.