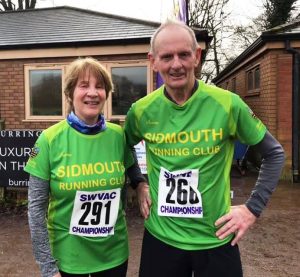 There was welcoming atmosphere at Sunday’s SW Veterans Championship Race at Sidford playing fields despite it having rained all night and morning.
As a result of the rain, the course was muddy, in places, inches deep and although flat this made the course very challenging, especially for myself (Ann) since I had no tread on my shoes!
The event was a competitive field and had attracted entrants from as far afield as Newquay, Bristol, Westbury and Salisbury. Most of the mud had stuck onto my shoes which slowed progress around the course. So, it came as no surprise that I crossed the finish line 47h05s later taking the wooden spoon. John Sharples fared a bit better than myself, but only a bit.
This run made John Sharples realise that he is genetically programmed to run only in straight lines! The course was a series of 90 degree turns around several rugby and football pitches. Every corner neatly sodden after the heavy rain. John commented “My technique was to apply the brakes as I approached each turn, with the intention of elegantly drifting around, likeTodd Carter in Dancing on Ice. Sadly this did not work” !
http://www.southwestvets.co.uk/race-page/results