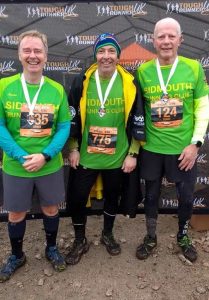 If you were travelling up Haldon Hill at 9.30am on the morning of Saturday 25th, you may well have wondered what on earth was occurring.
Around a thousand cars were queuing to get into the Exeter Racecourse for the first ever Exeter Epic Trail 10K which was organised by Tough Runner UK. This was a very popular event and judging by the club names on competitors shirts, was attended by runners from all parts of the country, such is the following and reputation for Tough Runner events.
Lining up at the start were Terry Bewes, Adrian Gripper Horne and Derek Blackburn. This was a chip timed race, so it was not a problem to hang around in the middle of the crowd and out of the chilly wind whilst the race got underway. The start was well organised considering there were 1200 runners setting off, but with this many competing, the first mile was very steady making it difficult to pass those in front. The first part of the course proceeded along and down a half mile tarmac road, then into the forest along stony paths and muddy tracks. Once again the Mighty Greens came into their element heading straight through the middle, while others tried to keep their shoes clean by shuffling and around missing the mud. This gave a huge advantage to the Sidmouth trio and many were passed. This was not a hilly course by any Mighty Green standard with only a mere 434 feet of elevation gain, but one where the hill training we get to do, really paid off.
For the last bit the forest opens up with a sprint for the finish being back on the tarmac again. First Mighty Green runner back home was Adrian in 55:25, first in age group at 330th overall an excellent result.
Derek was very pleased to arrive back in under the hour in 58:33 taking 2nd in his age group and finally Terry in 1:06:27. There were a total of 1281 finishers.
Two Mighty Greens Debbie Marriott and daughter Kate were helping on the stalls and Don Cawthera on parking control which gave them an entry into a different race .
Collecting their medals for the photo none of them looked forward to joining the queue of cars leaving the car park, but thanks again to the organisation it all went very smoothly. Praise goes to the organisation, marshals, First Aid cover, food and drink stalls were all first class.
https://toughrunneruk.com/events/exeter-epic-trail-10k/